McCabe Solos To Victory In Winston-Salem

McCabe had time to celebrate ahead of another American, Joe Lewis (Hincapie Sportswear Development Team), who was runner-up ahead of McCabe’s teammate, Canadian national road champion Zach Bell, who sprinted to third out of a small group five seconds later.

“This is huge,” McCabe said of the victory. “The team is based out of Winston-Salem. It’s our home town, so it was a race we really wanted to win. The team was always there in all the moves and all of the splits. It’s a big win for us. We’re really excited.”

The chaotic race came down to a group of 14 riders which formed in the final nine laps of the 171-kilometer race that comprised 15 laps of an 11.4-km circuit. A three-rider escape group of David Cueli (UnitedHealthcare of GA presented by The 706 Project), Matt Green (Astellas Cycling Team), and Oscar Clark (Hincapie Sportswear) stayed away out of that group for several laps starting at that point. A seven-rider chase group formed behind those three, and Green was eventually dropped. A group of 10 formed with three laps to go, but there was a regroupment of 34 riders about half a lap later.

Attacks continued to fly, but a strong counter attack by Will Routley (Optum presented by Kelly Benefit Strategies) with two laps remaining upped the pace in the group significantly. By the time Routley was caught due to an acceleration from Bell, there was only a lap to go and the front group had splintered.

Several teams were well-represented in the small group that contested the finish. Team Smartstop had four riders, Hincapie Sportswear had three and the Optum and 5-Hour Energy presented by Kenda squads each had two. Team Smartstop took over the front to set up McCabe, with the 2013 U.S. national elite criterium champion launching his winning attack on the final climb.

“I went on the steepest part – the last 50 meters of that climb,” McCabe said. “It was sort of like a stair-stepper. You had the kicker, it flattened out, then a kicker, and then the last 50 or 100 meters it was just steep. I knew right there we had four guys. I just lined it up and we just took a chance and I went as hard as I could up over the hill. It was so short after the hill that if I could get up and over with a gap, I could recover over the rollers. If anyone caught me I had enough of a kick. So I just took a chance and it played out really well.”

“To see the guys who didn’t know each other from the start, who had very few connections amongst them, come together and to be at the helm of that – for them to do what I say and trust it is very satisfying,” Creed said. “It’s one thing to say this is a tactic, and another for the riders to have a mentality to make sure it happens. These guys did that and there is a tremendous amount of satisfaction.”

In addition to the runner-up finish for Lewis, Hincapie Sportswear swept the king of the mountains and sprint competitions with Lewis and Alexander Ray, respectively.

Racing continues Saturday in Downtown Winston-Salem with National Criterium Calendar/USA CRITS series races. Professional women race for 60 minutes at 4:45 p.m. EDT, followed by a 75-minute men’s race at 6 p.m. Both races will be streamed live at: www.youtube.com/usacritsseries. A 50-mile and 80-mile gran fondo in the morning and a special USA Cycling criterium in the afternoon precede the pro races. 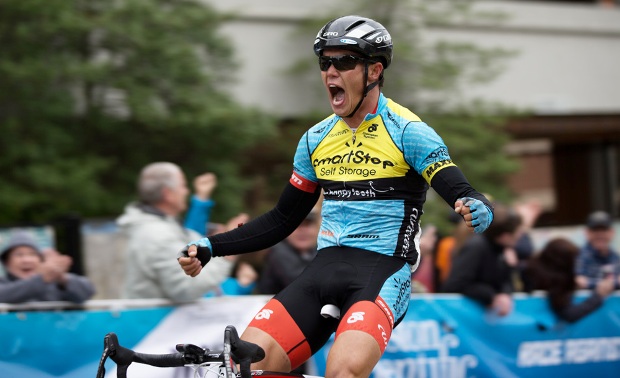 Photo: Travis McCabe celebrates his victory at the Winston-Salem Cycling Classic Friday in Winston-Salem, N.C., which is hometown to his Team SmartStop Pro Cycling squad. (Photo by Matt Brown, www.336Creative.com.)