After a strong showing at the recent Tour of Langkawi, consistently placing in the top ten, Michael Kolar and Erik Baška return to action this week in Europe with a double header of Belgian races. The duo spearhead a Tinkoff line-up that will tackle Nokere Koerse and Handzame Classic as the spring classics loom.

Joining Erik and Michael at the two one-day races are, Michael Gogl and Juraj Sagan, who also come to Belgium following the Tour de Langkawi. They’re joined by Tour Down Under stage winner, Jay McCarthy, as well as Nikolay Trusov.

Nokere Koerse
The first of the two races falls on Wednesday 16 March, covering a rolling 199.5km that concludes with finishing circuits that cover the Nokereberg each time around. As well as the repeated ascents of this cobbled climb, the riders will also tackle the Tiegemberg as well as other cobblestone stretches.
Giving his prognostics ahead of the race, Tinkoff Sport Director Tristan Hoffman said: “Nokere is a race with some history and it’s a great opportunity for some of the young guys in the team to gain confidence in racing for themselves and building for the coming races. The course itself finishes on the Nokereberg, a climb covered often in the classics, and they coverer it several times before on the circuit.

“Our goal for the race is support Michael Kolar for a sprint finish, helping him to be in the best possible position for this. If there are strong moves then of course we will look to take our opportunities, but if this race comes down to a smaller sprint as it usually does then we will support Michael for this.”

Handzame Classic
Two days after Nokere Koerse is the UCI 1.1 Handzame Classic, another tough, long 199km one-day race in the classics region. The race also includes several cobblestone sectors, meaning that positioning and riding as a team will play a key role on the day.

“With less cobblestone sections than Nokere, and a flatter course overall there’s more chance of a bunch sprint at the Handzame Classic,” explained Hoffman when looking ahead to Friday’s race. “The same team will race as does on Wednesday, but for this race we will look to support Erik Baška for the sprint there. It’s good for him to get his chance, for his confidence as a young rider, and to help the team build for the bigger races to come.

“We will also have Michael there if things don’t work out for Erik, with a strong team that showed in Langkawi that they are already riding well and can get results.” 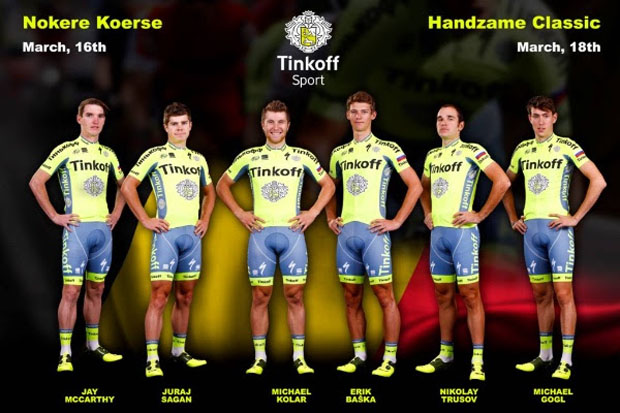