Michael Rogers: “World Championships TTT is the definition of teamwork”

The final preparations are being effectuated before the World Championships Team Time Trial in Ponferrada. Tinkoff-Saxo has sent six riders to Spain to compete in the only non-national team based event during the championship. Sunday at precisely 15:36, Rogers, Bennati, Valgren, Boaro, Roche and Juul-Jensen will roll down the start ramp onto the 57.1-kilometer route to compete for the win in, what Michael Rogers calls, the pinnacle of teamwork in cycling.

“This is a special race for the six of us, for Bjarne, who has always focused a lot on the TTT, and basically for the entire team. This is teamwork exemplified. As a result, we want to do a good job here. There are quite a few teams with high ambitions that have prepared carefully for this event, but looking at our squad I see six strong riders with big engines in race shape and many kilometers in the legs”, says Michael Rogers after having inspected the parcours together with his teammates. 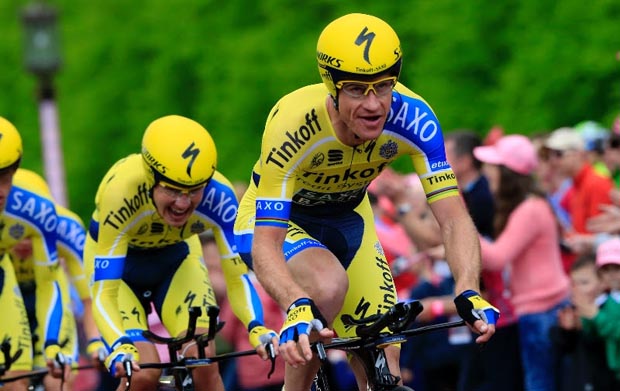 Michael Rogers is expected to be the pivotal point of the team during the TTT. With three World Championships Time Trial gold medals under his belt he’s capable of directing the team’s effort on the long route.

“It’s a fast circuit and the final 30 kilometers are challenging. We need to find our rhythm, not start too fast and finish off strongly on the final and most difficult part of the route. On behalf of the team, I can say that we are excited and ready to give our best. It will of course require a great effort to get on the podium, but knowing that I’m doing this together with five of my close teammates really motivates me”, adds Michael Rogers.