Stage two of the Giro Rosa turned out to be a decisive day for the overall contenders. Ashleigh Moolman-Pasio showed good form when she made a select lead group and sprinted to third on the stage.

The result also moved her up to third in the overall classification. Two GPM climbs 30km from the finish had a major effect on the race.

Flava Oliveira (Ale Cipollini) and Carly Taylor (Lotto-Soudal) attacked over the first climb and got a gap of 1 minute 30 seconds. Taylor crashed on the decent leaving Oliveira alone out front. 8 riders including Moolman-Pasio were left following Oliveira. The group of 8 favourites eventually caught and passed her.

Moolman-Pasio opened her sprint and was caught on the line by Megan Guarnier (Boels-Dolmans) and Anna van der Breggen (Rabo-Liv). Guarnier’s stage win also earned her the maglia rosa.

“Today was another hot day,” Moolman-Pasio said. “The team did an amazing job. In the beginning kilometres we were all together in the bunch and that always place a role in showing the team works as a unit. When we hit the climbs I took over. Rabo were forcing the pace on the climbs and I followed. I felt good and came very close to following the stage win. I took the sprint too long and got pipped on the line but we’re getting closer and closer and will look to more stages.” 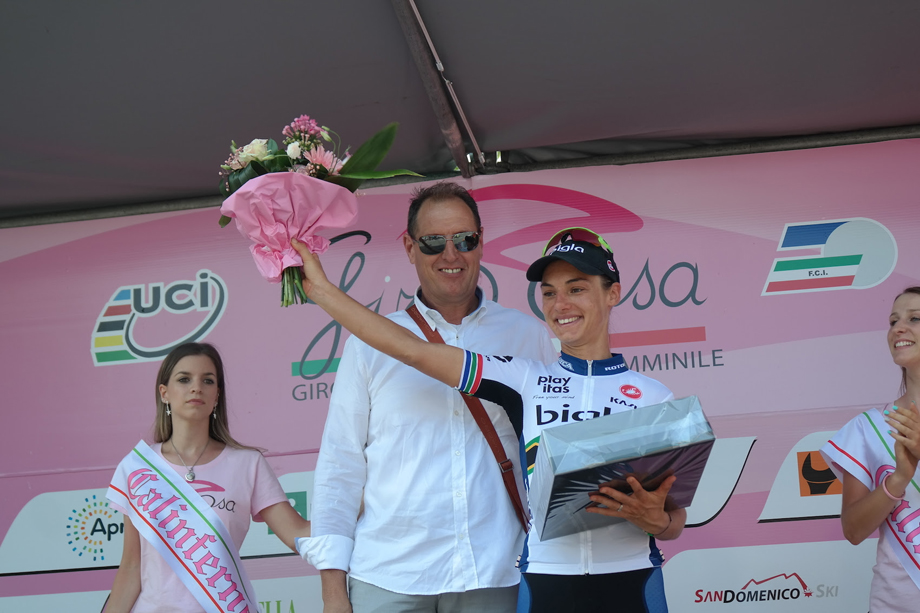