Moolman-Pasio solos to victory in Germany

In a repeat performance of last year, Ashleigh Moolman-Pasio won the final stage of Auensteiner – Radsporttage and with it taking the overall victory. The former South African champion has showed great form over the past weeks and was ecstatic to take her first UCI win of the season.

Moolman-Pasio started the final stage second overall, after placing second on the first two stages. She said her result today was down to the work the team put in for her and the talk she has with team manager, Thomas Campana.

“I’m just really happy with the win today,” she said after the podium celebrations. “Yesterday we had a good pep talk from Thomas. He was happy with our performance but he felt we had so much more to give. He was hard but very inspiring and that showed today. The team gave everything and they executed the team plan to perfection. I definitely couldn’t have done it without my teammates today. I’m really happy to reward them with a win.”

Moolman-Pasio has been very vocal this season about the disappointing Spring campaign she endured. Illness and crashes put an end to any early season goals she had. The result today gives her confidence as she moves onto the Aviva Women’s Tour and eventually the Olympic Games.

The team plan was to make the racing hard from the start and for the 30-year-old to attack with three laps to go.

“After all the hardship I’ve gone through this season, it’s great to win solo like this. The team plan might have sounded a bit crazy at the start of the day. Thomas instructed us to start putting the pressure down early on in the race and then the plan was for me to start attacking on the 6th lap. On the climb Lisa Brennauer (Canyon-SRAM) was the only one who could follow me and we got a gap but there was still a lot of motivation from Orica-AIS to bring us back. We put them under more pressure and when it came back it was a very small group. Stephanie [Pohl] was there and she set me up perfectly for the next attack. I went full gas from the bottom of the climb and I was on my own. I still had 3 laps to go and just kept thinking of everyone who believed in me like Thomas and my husband Carl who is here.”

“The team worked to set up this attack,” Campana said. “After the first attack she was brought back. She went again with a confidence that has just been growing. The riders she rode away from are from impressive teams with really good set ups. We also won the team sprinters jersey with Lotta [Lepistö]. We’re getting closer to the team we’ve wanted to build since last year. This is a big boost for Ashleigh and it has come at the right moment.” 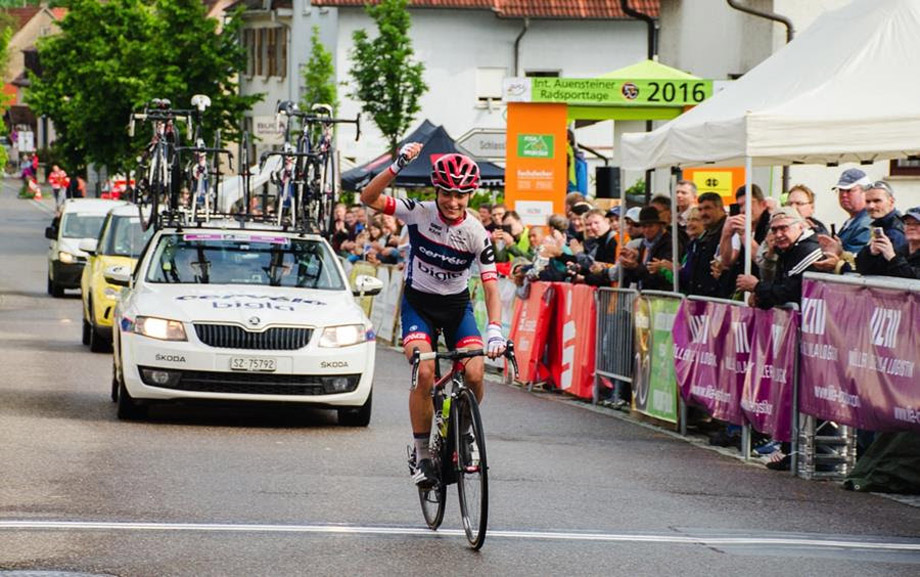