More ‘Axeon’ In Europe This Weekend And Next

The Axeon Hagens Berman Cycling Team completes its swing through Italy on Sunday before several American riders move on to compete for USA Cycling’s Under 23 national team at the Tour de Bretagne. 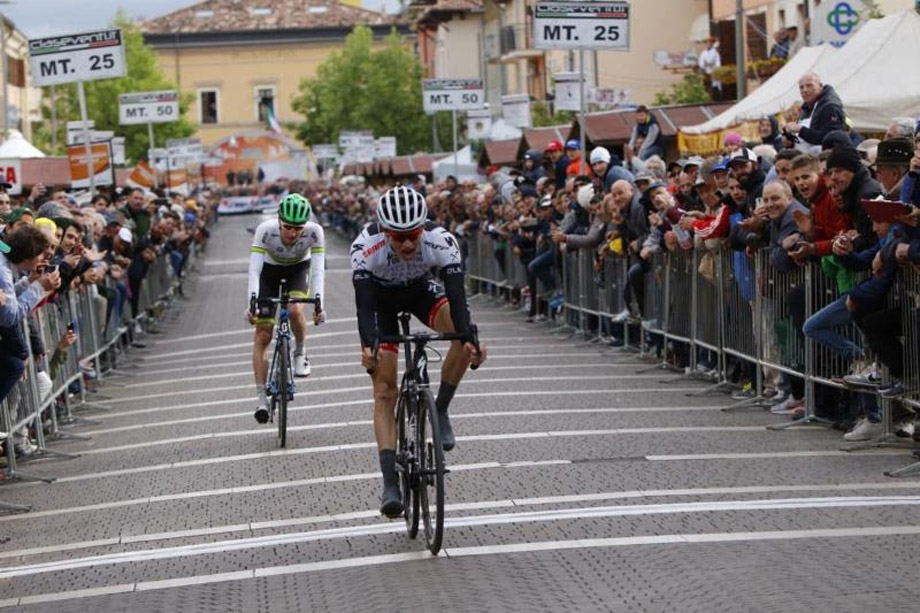 “It is a good circuit for Eddie,” Axeon Hagens Berman Sport Director Koos Moerenhout said. “He has proven to be strong on the climbs and Chris and Logan can also be there if they can survive the hills. It will all depend on how the race evolves. The climb on the circuit is only a little more than a kilometer, but quite steep. It is normally the decisive factor. But if the group stays compact or relatively close to each other, then we will have different options.”

Dunbar, Lawless and Owen have all won road races this year, contributing to Axeon Hagens Berman’s six UCI victories. Lawless, the British national criterium champion, is coming off a win at ZLM Tour while riding for his national team. Dunbar, the Under 23 Irish national time trial champion, won the Under 23 edition of Ronde van Vlaanderen, also while riding for his national team. Owen took a stage of Volta ao Alentejo for the team’s first win in Europe in February.

Four On Roster For Bretagne
Beginning Tuesday, four Axeon Hagens Berman riders will compete for USA Cycling at the Tour de Bretagne. But the defending champion of the French race, Adrien Costa, is not one of them, USA Cycling Under 23 Manager Nate Wilson said.

“It was a decision he and I made together,” Wilson said. “He could go there and do well, but it is not the best thing for him at the moment.”

Even without Costa, Team USA has plenty of firepower to contend again for the overall, said Wilson – a rider himself on Axel Merckx’s development team in 2013.

“We certainly have a strong line up with multiple riders who can hope to contest for the win,” Wilson said. “Some may look at this as a challenge. But as long as we play it right, it is only a strength. The key, for me, is to create an environment where one rider is just as happy to see their teammate win, as they are to see themselves. If we can use our strength collectively, we will be successful.”

Wilson said Barta, Owen and Powless are all veterans who have the capability of leading the team. Powless is coming off a win Tuesday at the one-day Italian race, G.P. Palio del Recioto. Barta finished a team-best fourth at Liège-Bastogne-Liège U23 last Saturday. And Owen is fully recovered from illness and injuries that slowed him after he helped win a stage and the team classification at Volta ao Alentejo. The fourth Axeon Hagens Berman rider, Ian Garrison, was runner-up in the Under 23 edition of Gent-Wevelgem. Joining them to round out the six-rider squad will be Sean Bennett and Gavin Hoover.

In his first year of directing the team, Wilson said he is satisfied with how well the squad is working together and creating a good environment. In terms of tactics, Stages 3, 6, and 7 look to be the most pivotal in terms of terrain, he said.

“However, in Bretagne, the wind blows,” he said. “That means that any one stage can be decisive. Having a chaotic and unpredictable race also circles back to the benefit of having multiple riders who can handle leadership duties. We do not have to be stressed if our singular leader misses a breakaway because we can put another strong rider into the move.”