Moses, who won a stage and wore yellow at the recent Tour of Normandy, was delighted to take victory on home soil, in one of the toughest races in the country.

“It’s really great to win here. It is a race that everyone in the UK wants to win, and after all of the team’s international success this year I was especially motivated to do well.”

Moses had been part of a seven-man move that had gone clear in the first hour of racing. With all of the major teams represented, the break soon pulled out a two-minute gap. However a strong chase by the GB team saw their lead reduced to just over a minute before the first ascent of the Somerberg. It was here that Moses and Yanto Barker took the initiative to attack, forcing the group to chase hard and pull themselves clear of the bunch.

“As soon as the move went away I knew that I was on a good day. John came up to me in the break and told me that I shouldn’t show my hand too soon. But we started to slow a bit and the bunch came back so I had a go. We were brought back by the break, but it was enough to pull us clear of the bunch.”

While the peloton wouldn’t see the break again, three riders, including Kristian House, did manage to bridge across to the move with ten kilometers to go.

“When we came to the last ten kilometers I was feeling pretty good. Then when the counterattack with Kristian got across, McNally went but I was ready and just went straight over the top of him, and pressed on to the finish.”

The 1.2-ranked race is Rapha Condor JLT’s fourth UCI win of the spring, and comes despite the team struggling with a number of injuries, which meant the Men in Black started the race with only five riders instead of the possible eight.

Elsewhere Hugh Carthy continued to show fine form, clocking 19’ 10” to win his second 10 mile TT of the season, before backing it up with a road race victory in the 6th round of the CDNW RR League, which he won by an impressive two and a half minutes from his nearest rival.

The team’s next race will be the Wiltshire Grand Prix next weekend. 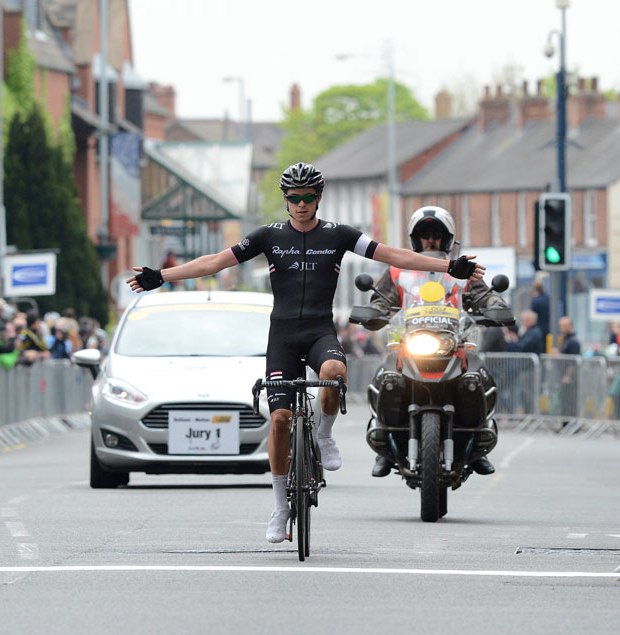