The Tour of Norway and World Ports Classic both reached its conclusion on Sunday with Team MTN-Qhubeka p/b Samsung being able to take much motivation and good morale with them after securing top 5 GC placing’s in both events.

Gerald Ciolek had shown great climbing form all week in Norway and while just missing out on a stage victory on a number of occasions, the German’s consistency and an eventual 3rd place on yesterday’s final stage saw Ciolek secure 5th place on the Final General Classification. This result along with Louis Meintjes 5th place at the Giro del Trentino is the team’s best General Classification result in Europe this year. 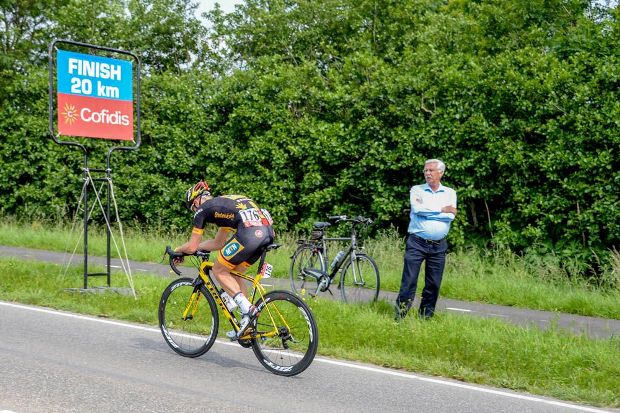 Andreas Stauff showed good awareness on the first stage of the World Ports Classic to get into the break and then he was able to win the all-important bonus seconds at the intermediate sprint. During the final stage Stauff kept his composure in the wind and made sure he fought hard to stay in the front positions when the race began to split. By finishing with the leading group on the final day Stauff was able to secure his 5th place on the General Classification as well.

Gerald Ciolek
This last day was harder than I expected, especially after a lot of tough climbing this week already. We had to do a hard finishing circuit 4 times and the pace was already on in the first lap. I had a bit of bad luck when I punctured with 25km to go, just at the point when Belkin started riding on the front. They gave me a hard time trying to get back to the bunch. In the final kilometers there were a few attacks and I was feeling good so I could follow the wheels and in the end, also contest for the victory with the 7 other riders. I wasn’t in the best position for the sprint so there was no way I could have won against a super strong Kristoff and Jempy Drucker.

I am very happy with my condition at the moment, maybe I could have got more out of this week but now I am looking forward to the Bayern Rundfahrt.

Andreas Stauff
I had a good day today where I was able to avoid all the crashes and stay out of trouble by riding in the front positions. At the end I made it safely to the finish with the first 25 riders and secured my GC spot. It’s my best GC result in years, actually my first in the pro ranks, so I’m obviously quite happy with that. I was hoping to finish with a better GC result here than Gerald did in Norway, but he moved into 5th place as well today. Anyway it feels good to finish the tour like this and now we can look ahead to Bayern.

Both Stauff and Ciolek are now heading to the Bayern Rundfahrt, where they will be joined by Linus Gerdemann, Louis Meintjes, Ignatas Konovalovas, Jay Thomson and Jaco Venter. Gerdemann is coming off his stage win in Azerbaidjan, Meintjes last stage race was the Giro del Trentino where he climbed away from the likes of Evans and Wiggins, and Thomson showed his form in a solo break at the World Ports Classic yesterday. On the back of these results the team are very optimistic ahead of the Bayern Rundfahrt before then turning our attention the Tour du Suisse.

Team Belkin will fight daily for a Belgium Tour win