Movistar: A Day to Remember

Splendid teamwork piece from start to finish by the Movistar riders -which stays on top of the teams’ classifications and keeps Quintana’s white jersey, putting three riders within the best ten overall- leads Valverde into 2nd place GC and takes Richie Porte (SKY) 15 minutes down

Movistar Team leaves behind today the first half of the Tour de France, reinforced as the strongest squad in the race thanks to splendid performances in the Pyrenees, which witnessed its final chapter today over five climbs in the 168km trek between Saint-Girons and Bagnères-de-Bigorre. The telephone squad fought already since the first ascent, the Portet d’Aspet, to break order into Chris Froome’s Sky squad, launching into the attacks with Erviti, Castroviejo, Rojas and Iván Gutiérrez, who later had to abandon the race, completely out of energy after a tremendous effort in the opening phase.

Valverde would filter into one of the moves through the Col de Menté, forcing Froome to respond along and breaking the group, with Richie Porte, 2nd in the overall, dropped early into the stage and struggling to complete an unsuccessfull pursuit in the second part of the stage. Movistar Team always kept the race alive, with no less than six riders at the front -Valverde, Costa, Quintana and brilliant Amador, Castroviejo and Plaza- to dominate the pace into the climbs of the Peyresourde and the Val Louron. Nairo Quintana was the man in charge of lighting things up with up to four attacks in the final ascent, the Hourquette d’Ancizan, finding responde from Froome himself, the yellow jersey not conceding a meter’s advantage.

A breakaway starting halfway through the last climb, with Jakob Fuglsang (AST) and Dan Martin (GRS), granted the Irishman the stage victory, while the favourites’ group, with Valverde, Quintana and Costa, came across the finish just 20 seconds back. The final result sees Alejandro Valverde in 2nd place overall, 1.25 down on Froome, and makes Quintana (7th, still leader of the Young Riders’ competition) and Costa (10th) jump a place higher in the GC thanks to Porte’s defaillance, losing more than 15 minutes at the finish. The Movistar riders, who lead the Teams’ classification by more than four minutes, will travel this very evening to Brittany -riders will get by plane, with the rest of the caravan to cross the country on wheels-, looking for a well-deserved rest day before action restarts on Tuesday.

REACTIONS:
Rui Costa: “With all hardness and the toll that yesterday’s stage took on us, we knew that today’s stage was going to be hard, and it really was. Everything broke up into the first climb: we were able to isolate Froome and we tried in all ways to create a breakaway and keep the pace high. It wasn’t possible, but we still tried to work hard until the final climb. The pace put by Nairo was too much for me and I dropped, but was able to bridge with 1.5k left, and tried to help in the finale as much as I could.

“It was sad not to be able to contest the stage, but I think we did well: the team was really strong, we took Porte out of contention and we must be calm and happy. As well myself as Nairo and Alejandro are feeling well – we didn’t have any bad crashes and we’re ready to fight in the next stages. I personally didn’t lose much time and think I can be useful for the squad, depending on the tactics that might create during the remainder of the race. We three will push as much as we can to stay on top of the standings and also winning the teams’ overall. It would be wonderful to get that prize in Paris. Now it’s time to rest – we’ll see what happens from Tuesday.”

Alejandro Valverde: “It was a really, really hard day. Already into the second climb I tried to move and brought Froome behind me. We attempted to liven things up and we didn’t found the best version from Sky. We took Porte out of the fight, a big rival, so even though the best possible finish would have been winning the stage and we couldn’t do so, we should not keep thinking about it: we must be happy about the rest. The team performed tremendously well and I’m leaving the Pyrenees in 2nd place overall, so the overview after this stage must be positive. I want to thank all the crowds cheering for us on the road and everyone supporting us from TV at home; this effort was for them.”

Nairo Quintana: “It was a beautiful stage and quite a good result for us – we proved all the people we have an excellent squad, with all riders at a very strong level, ready to help myself as well as Rui and Alejandro. We all put our effort at the team’s service, and that made us reaching the finish with three riders into the front group, losing no time, which was the main goal. We showed the world Sky also has weaknesses, but Froome is really strong and it’s difficult to hurt him. Still we’re taking some energy from him, making him work and suffer in view of the next stages. There are still many strong rivals in front of us, which we will have to fight against in the remainder of the race. For the time being, getting over this week with the white jersey is quite good and I’m really happy of wearing it. The first rest day comes tomorrow and we’ll try to profit from it – getting on a short ride with the team-mates, talking about anything but the race to get the nerves off.” 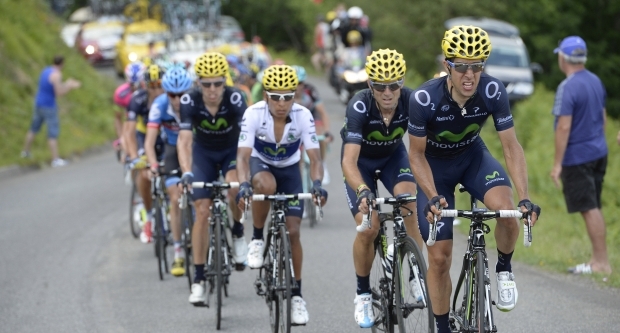 Lotto Belisol: Lars Bak extends contract until the end of 2014