Movistar Team takes 7th -19 seconds down on OGE- at team time trial, stays close to main GC favourites with all its block together at the finish.

Another important test is over for Movistar Team in the 2013 Tour de France as the telephone squad performed head to head with the best squads of the world in the flat, fast, 25-kilometer team time trial in Nice, perfect for specialists and big rouleurs. The squad directed by Eusebio Unzué kept a solid, regular pace all over the course and brought all nine riders across the finish to stop the clock in 26’15”, just 19 seconds behind the Australian Orica-GreenEdge team, which put Simon Gerrans in yellow after beating Omega Pharma-Quick Step by 0.75 seconds.

The seventh place by Movistar Team leaves the GC really close between all big favourites, with Valverde, Quintana and Costa just 15 seconds off the pace of Chris Froome (SKY), 10″ behind Alberto Contador (TST) and even with Cadel Evans (BMC) or Joaquim Rodríguez (KAT). Before the Pyrenees -on Saturday and Sunday- will come three nervous stages in Provence, starting on Wednesday with day five: 229 km between Cagnes-sur-Mer and Marseille, including four categorized climbs and, above all, the dangerous descent of La Gineste, just 12k from the finish.

REACTION / Eusebio Unzué: “We knew we couldn’t win nor lose much because the TT was really short. It was also a fast one, as shown by the winners’ average speed, and looking at our riders’ characteristics, we were a bit less favourite than expected. We lost less than a second by kilometers with a team full of specialists like Orica, and that makes me feel we did a nice TT. After our recent results and knowing that the boys were feeling good, we could predict it would be a good ride for us, but there were six or seven teams which were clearly to perform strongly Orica and Omega brought the best specialists and obtained their result, plus Sky also did fine, as well as Saxo. It’s just a twenty-second gap, so it’s a satisfactory result for us.

“With the dangerous roads proposed for the Corsica depart, getting over the opening four stages with 10-15 seconds behind some of the biggest favourites, such as Alberto or Froome, is something we would have signed below before starting the race, especially because we had no troubles and all of the guys are in perfect condition. Now we have three days to tackle before the Pyrenees – the sprinters should rule them and I think their teams will be probably blocking the race to ensure mass sprints, so it will be difficult to witness any surprises before the mountains. Our goal before them will be protecting Alejandro.” 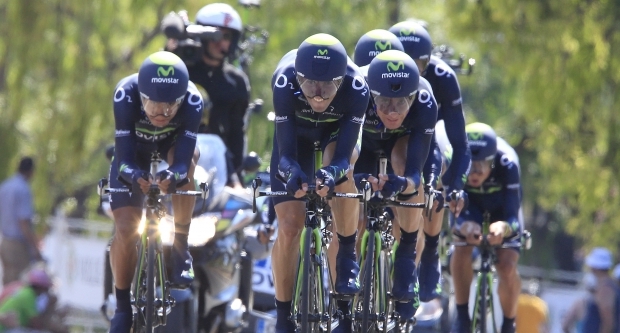