Movistar Team closes European season on Sunday at the 107th Il Lombardia, with Rui Costa riding for the first time in the rainbow jersey alongside Alejandro Valverde and Nairo Quintana.

The Movistar Team’s European season will come to an end on Sunday -not yet with their 2013 schedule, set to finish at the Tour of Beijing (Friday 11th – Tuesday 15th)- as the penultimate event of the World Tour unfolds in the north of Italy. The 107th edition of Il Lombardia will mark the last of the five monuments of the classics season, with 242 kilometers between Bérgamo and Lecco featuring the climbs of Valico di Valcava, Colma di Sormano -into the infamous ‘Muro’, with 1,900 meters at 17% average-, Madonna del Ghisallo and Villa Vergano.

The Foglie Morte will be Rui Costa’s first outing in the rainbow jersey, one of the references for a Blue roster which includes Nairo Quintana and Alejandro Valverde. The eight-man squad is completed by Andrey Amador, Jesús Herrada, Beñat Intxausti and Italians Giovanni Visconti & Eros Capecchi. 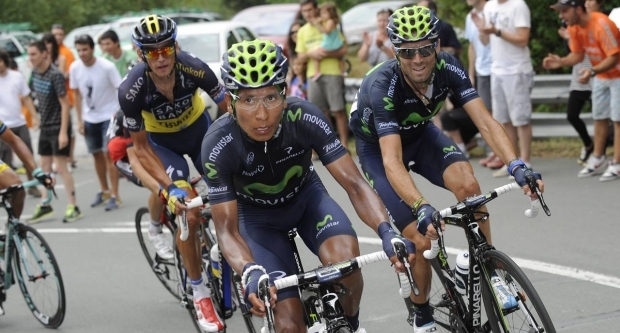