Team MTN-Qhubeka p/b Samsung will return to the Trofeo Laigueglia this Friday after a successful debut in the Italian race last season. Gerald Ciolek finished in a fine 5th place last year when the team took on their first ever European race as a Professional Continental team. This year Ciolek will be racing at the Ruta Del Sol and so it will be up to the young Italian, Kristian Sbaragli, to lead the team during Laigueglia.

Speaking to Sports Director Jens Zemke, Zemke justified Sbaragli’s leadership role. “Kristian deserves the chance to have the team ride for him, after a strong performance and a top ten in the Mallorca Challenge. He made a huge step and if he is climbing strong enough we have a fast guy for the downhill finish”. Team MTN-Qhubeka p/b Samsung will not have all their eggs in one basket though. “Jay Thomson is coming from S.A. with 2 medals from the Nationals. He will be motivated as well and could maybe surprise in a race like this,” Zemke added.

Dennis van Niekerk will form part of the MTN-Qhubeka p/b Samsung team at Laigueglia and is expecting a tough race. “It is a really hard race I think it will come down to a small group to the last climb and then the race will explode. When it does we need to make sure we have numbers in the front,” Van Niekerk said. Van Niekerk has been making a steady comeback from injury and is happy with his form going into Laigueglia, “I surprised myself with how I went at SA’s and since then I have been tapering off just a little, I put in some good work before the champs and now I’m ready for the big block of racing coming up.”

Along with Sbaragli, Thomson and Van Niekerk, the rest of team will be made up by Martin Reimer, Songezo Jim, Meron Russom and Johann van Zyl. Zemke is confident in the team selection for Friday’s race. “The race will be tough, especially with the Italian Pro Tour teams who try to control the race. They always bring really strong riders to this race but I was very happy with what I saw from our guys at the training camp in Mallorca,” said Zemke.

“Our African riders have taken a step in the right direction this year. There are many steps in the ladder for them to climb before we see their best fruits though but after the training camp I can say they have definitely gone up a level and are ready for these first races,” concluded Zemke. 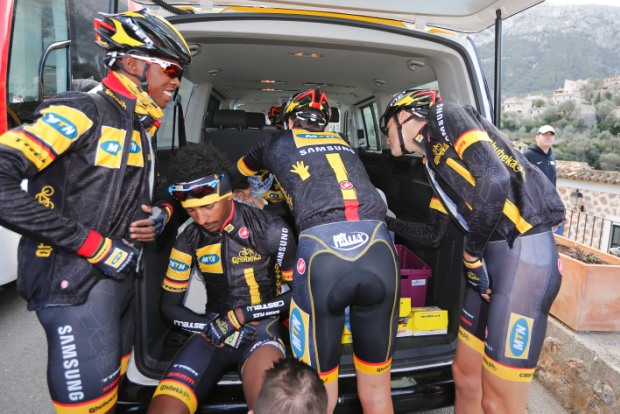 Thanks to Mitsubishi technology, Crossover lands in pro cycling