1,400 meters separated Nairo Quintana from writing his name in the legend of the Tour de France in one of the iconic stages of the 2013 edition, the longest in this year’s race over 242 kilometers between Givors and the summit of the Mont Ventoux (HC), covered at a hellish pace from start to finish. The attempts to enter the early break made an impressive start, with 100 kilometers covered in the opening two hours; afterwards, with almost nine minutes of advantage for the leaders, the work from Europcar and ultimately Movistar Team left their gap in just 1.30 at the foot of the ascent.

An acceleration from Rui Costa in the beginning of the steepest sections made a selection into the group of favourites and prepared Quintana’s attack, 13km from the top. The Colombian quickly gained more than thirty seconds as he took the lead of the course along with Mikel Nieve (EUS). Behind, the pace by Porte (SKY) and the move by Froome -breaking the group and dropping Valverde, who struggled to finish in 13th place- caught Quintana with 7k from the finish. After two unsuccessful attacks, responded by a strong Nairo, the race leader left Nairo behind with one kilometer from the summit. Despite the sour-sweet second place, the Movistar Team takes his white Young Riders’ leader jersey back and is now 6th in the overall, 5.47 behind Froome, but just 1.22 off the podium.

The Tour de France will hold its second rest day on Monday, prior to a marathon of Alpine mountains starting with a complicated finish in Gap (Tuesday). A demanding ITT to Embrun will follow in Wednesday, with three infamous mountain stages as the last stops before Paris.

REACTION / Nairo Quintana: “Today’s result is good. I felt well all day, and even though we didn’t win, the were at the front and we took back the white jersey we lost in the TT. I attack because I saw many riders struggling and knew it was a zone where very few could keep a strong pace. The idea was to win some time and get close to the podium; I knew the white jersey would come with that attack and I dreamt of winning the stage, too.

“Unfortunately, Froome caught me. He’s way superior than the rest. The first attack came from behind and took me out of focus. I followed his wheel in the distance and ended up bridging. He thought I was stronger than I was really feeling, and that’s why he talked to me, telling we should keep pushing to leave Contador behind, and he’d let me win the stage. But I knew it was a bit of ‘fake agreement’, because I saw how strong he was and I had to fool him a bit to get that far into the climb. He needed to take more time, I’m not at the same level and even though he didn’t fulfilled his promise, I understand him. I knew I wouldn’t be able to put up with another attack, and when he move, I pulled a bit off the gas, took a breath and went on my pace until the finish so as not to lose too much time.

“I hope to keep the white jersey and take some more time to be on the podium. There are some tough stages coming up, plus the TT, where I hope not to lose as much time with the other rivals as in the first one. It suits me better than the flat one – should it be flat, heavier riders would make things difficult, but I’m convinced I’ll perform well. These days are taking their toll: En estos días ya se acumula el cansancio: stages are longer, you’ve got to get up earlier, you don’t rest as much as you would like… but this is for everyone – I think next week’s stages will play on our favour.

“We have a strong team – dynamic, with good cooperation between all members. I thank my team-mates for all the efforts, and also to the team manager, who plays an important role in the races, playing his cards with intelligence. I want to thank all Colombians following the Tour and supporting me through the media and social networks.” 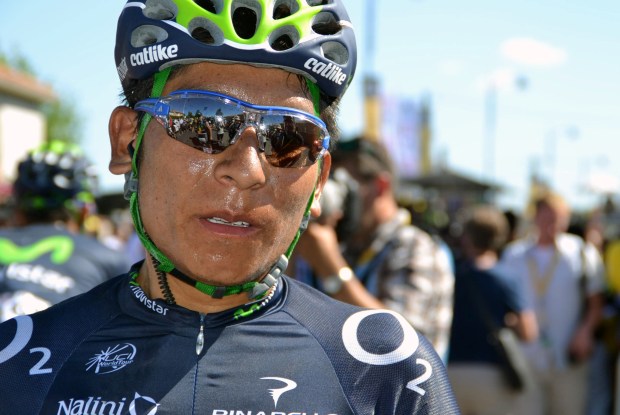 Mont Ventoux can’t get Belkin down