Jhonatan Narvaez of the Axeon Hagens Berman Cycling Team climbed his way into second overall at Circuit Des Ardennes Saturday on the strength of a runner-up result on the Stage 2 uphill finish. 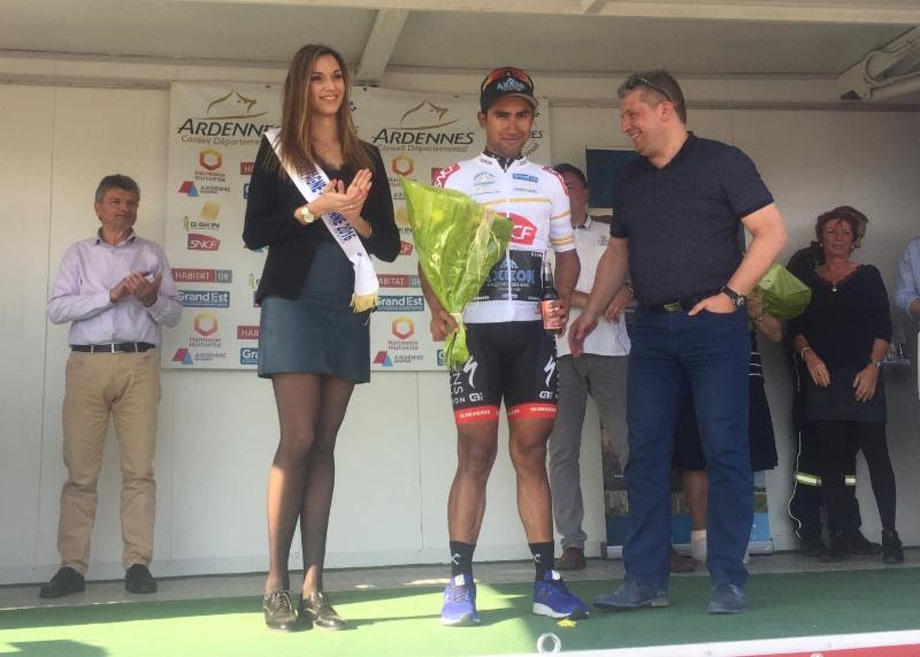 In addition to his climb up the overall standings, Axeon Hagens Berman’s Jhonatan Narvaez also took the lead in the “best young rider” classification. (Photo by Jim Anderson.)

Ecuadorian’s Under 23 national time trial champion was only beaten to the line at the end of the 174.8-kilometer race by Denmark’s Rasmus Guldhammer (Team Veloconcept). Austria’s Riccardo Zoidl (Team Felbermayr-Simplon Wels) finished third, two seconds back, and ahead of Kevyn Ista (WB Veranclassic Aqua Protect).

Narvaez’s best result in a race in Europe this season also earned him the “best young rider” jersey with one day and two stages of the race to go.

“I am happy to have earned second place and be in second overall,” the 20-year-old first-year rider for Axeon Hagens Berman said. “There are two stages left and I will try everything in my power to win.”

Narvaez was in the company of some seasoned veterans as his group of four raced up the two-kilometer climb at the end of the race that started and finished in Rochehaut, Belgium. Guldhammer is an 11-year professional who has competed for the likes of WorldTour teams Tinkoff-Saxo and Team HTC-Colombia. Zoidl, 29, also has WorldTour experience, having raced for Trek-Segafredo from 2014-2016. Ista, 32, has ridden for six different professional continental teams in his 12 seasons.

Narvaez said he learned a valuable lesson while trying to win his third race of the season against such respected company.

“I felt very good on the last climb,” he said, “but I needed more kilometers of mountain to win at the end. My mistake was to get in a sprint with the others. I also want to say my teammates were spectacular today in controlling the race very smartly.”

Two of his four Axeon Hagens Berman teammates joined him in the top 20 on the day. Will Barta and Adrien Costa finished 18th and 19th, respectively. The Americans are among a group of 43 riders who are 28 seconds off the lead.

Sunday’s morning stage is a 76.1 km race with a six-kilometer climb in the last 11 kilometers while the afternoon race is 103 kilometers and finishes with only a slight uphill. Narvaez is four seconds off the lead, with both Zoidl and Ista a further four seconds back.

Axeon Hagens Berman Sport Director Koos Moerenhout said Narvaez, Barta and Costa all have a chance to further shake up the standings on the final day.

“The morning stage is hard, but there are still possibilities to make it a good race and try for the win,” he said. “Jhonatan had a good learning moment today so he knows next time to try to avoid a sprint. He rode very well today.”