Team MTN-Qhubeka p/b Samsung are very happy to announce the signing of Natnael Berhane for the 2015 season. Berhane is a former African and Eritrean road race champion as well as the current national time trial champion of Eritrea. During last year’s Tour of Turkey, Berhane made history by becoming the first black African to win a professional cycling stage race in Europe when he won the races overall classification. Berhane also went on to win Africa’s most prestigious UCI race this year, The Tour of Amissa Bongo in Gabon, after out-sprinting Spain’s Luis Leon Sanchez for the all-important bonus seconds on the final stage.

Having spent the past 2 years with the French Europcar outfit, Berhane has gained some invaluable race experience by competing in a number of world tour events, including the Vuelta a Espana this year. As one of Africa’s finest cyclists, it was only natural for the 23 year old Eritrean to now join Team MTN-Qhubeka. We look forward to Berhane flourishing in the colours of Team MTN-Qhubeka in 2015.

Rider – Natnael Berhane
To join Team MTN-Qhubeka is the opportunity to represent my country and my continent in an African professional team that races in all of the world’s biggest cycling events. My main objective is to help the team to achieve good results in these important races that we will take part in. I would love to be part of the first African team taking the start in Le Tour de France as well. Personally, I want to achieve results that will bring much prestige to the team and at the same time, I want to give everybody in Eritrea a reason to be proud.

Team Principal – Douglas Ryder
We are really happy to have Natnael join Team MTN-Qhubeka next season, at his young age he has shown incredible potential by winning stage races in the last 2 years and he is a great addition to our stage race team in 2015. He came through the World Cycling Centre African satellite in Potchefstroom, South Africa, run by Jean-Pierre Van Zyl which Team MTN-Qhubeka has supported over the last few years. He has inspired so many riders and talks openly about the transition to living and racing in Europe and how dreams do come true if you have incredible motivation and dedication. 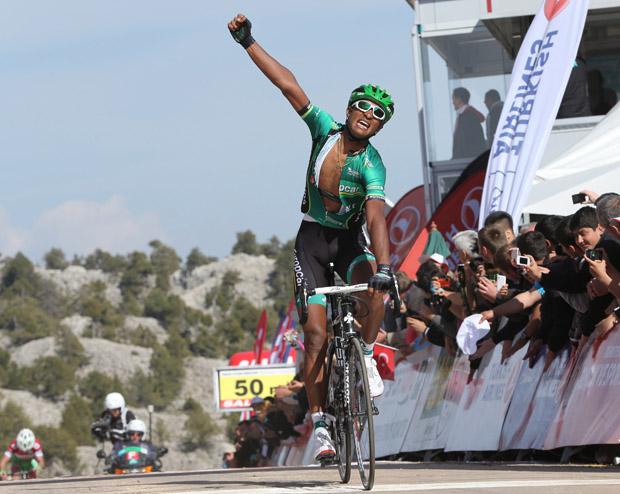 About MTN-Qhubeka
Team MTN-Qhubeka was founded in 2007, steadily working its way up from a regional team to now being a Continental Pro team with bases in South Africa and Italy. MTN-Qhubeka’s goal is to give talented African riders a path into the pro peloton while raising funds for the Qhubeka charity.

MTN (mtn.co.za) is a long time supporter of Qhubeka and the team. Launched in 1994, the MTN Group is a leading emerging market operator, connecting 210 million subscribers in 22 countries in Africa, Asia and the Middle East.

Learn more about the team at www.teammtnqhubeka.com​

Crawford collects second win for Drapac at Tour of Tasmania