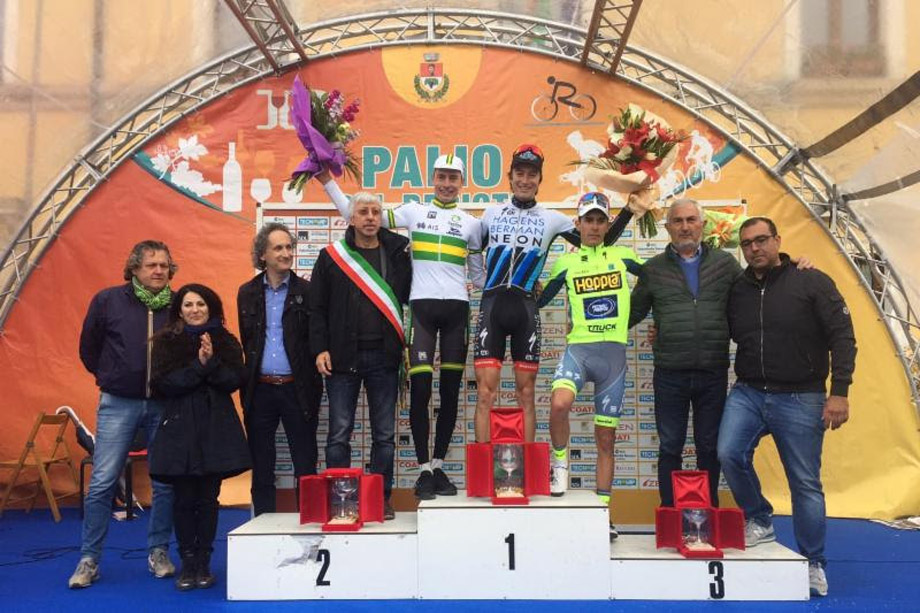 It was the sixth UCI victory of the season for Axeon Hagens Berman and the second of the year for the 20-year-old from Roseville, California, the “best young rider” at last year’s Amgen Tour of California. Earlier this month, Powless won the individual time trial at Triptyque des Monts et Châteaux on his way to finishing third overall in the Belgian race.

“I did not think I was going to be able to climb with him over the longer climbs on the 45-kilometer finishing circuit,” Powless said of Hamilton, the Oceania Continental champion who was also runner-up Monday at another Italian race, Giro del Belvedere. “So I just tried not to look at my power meter because it was a bit overwhelming at times. I focused on not losing his wheel.”

“With 10 kilometers to go, I knew it would come down to a sprint. I was aware he did not have much of one because he worked so hard to drop me on the climbs. So I took the lead heading into a pair of 90-degree turns in the last 250 meters and gave it everything I had and it paid off.”

One year ago, Axeon Hagens Berman’s Ruben Guerreiro won this same race – also in a two-up sprint – for the American Under 23 development team managed by Axel Merckx. That win was the squad’s first of 2016 on the way to a team-record 16 UCI victories in its eighth season.

“As for the success we have already had, I think that one of the challenges of this team is to give everybody a chance,” Axeon Hagens Berman Sport Director Koos Moerenhout said. “Basically, the whole team is good. That sometimes makes the team tactics for their individual goals a bit difficult. Our guys cannot always do what they want because there is always somebody up there. So sometimes you can have good legs and not do anything. But everyone is always working well as a team, so working for someone today means an opportunity to race for yourself and prove it tomorrow.”

“It was really the best guys who were in front today. It was as simple as that,” Moerenhout said.

A group of 20 riders quickly shook free and eventually became 10. Both Powless and his Axeon Hagens Berman teammate, Eddie Dunbar – winner of the Under 23 edition of Ronde van Vlaanderen this month – made the split. Their 10-man group held an advantage of between a minute and 90 seconds over smaller chase groups until the terrain started going up in the final 45 kilometers. With 30 km to go, Hamilton attacked, Powless followed and the pair was never to be seen again.

“He was putting in digs on pretty much every little climb,” Powless said. “I went pretty deep in the red but just kept clawing back.”

The pair’s lead over what was left of the chase grew from one minute to two and the pair ended up 1:28 ahead of third-place finisher Massimo Rosa (Hopplà Petroli Firenze). Dunbar finished sixth, 1:40 back and in a group of eight.

“I am really happy with the way things are going and think compared to last year, I feel a bit stronger,” Powless said. “I did not have the most confidence coming into the race. I knew Hamilton was on form and a rider I was watching a lot. But today, I rode a smarter race and it worked.”