The Bretagne-Séché Environnement team, known as the identity in the professional peloton since 2013, will become Fortuneo Vital Concept from 1 January. It will bear the name of two new Senior partners: Fortuneo Bank, a leading French online banking-also located in Belgium under the brand Fortuneo Bank- and Vital Concept, leader of distance selling for the agricultural world .

Both partners are committed for three years until the end of 2018. They do not wish to disclose the amount of their investment. A preserved Breton identity and a reserve team supported by the Region.

Brittany Region and Séché Environnement allowed the emergence of the team at the professional level. Emmanuel Hubert, general manager, its riders and staff are grateful for the opportunity of this ad his two current partners, key players in the progression of training, enhanced by noticed two participations in the Tour de France in 2014 and 2015.

Regional identity of the team, praised throughout the Tour de France which ended with thousands of hectares of Gwen, the Breton flag, will not be forgotten. The two new partners securities while claiming a development well beyond Britain, have their roots there. Fortuneo Bank is a subsidiary of Crédit Mutuel Arkea whose headquarters is based in Brest (Finistère), and Vital Concept is a company based in Loudéac (Côtes d’Armor).

The involvement of the Brittany Region will continue to be more incarnated via the formation of a team Fortuneo Vital Concept reserve which it will finance. Its purpose will be to detect and train promising young talent Breton cyclists.

“This new stage in the history of our team will build on the work done in recent years and a clear objective: Raising the standard in terms of sporting performance. These will be achieved through the riders who have already proven themselves under our colors, but also by recruiting new talent. Our team is very happy at the idea of ​​sharing this ambition with two new titles partners already accompanied us in recent months, however, keep two essential elements of his DNA. Its Breton identity in the first place, thanks to the team project provided that we will build in the coming months with the region, which I treasure. His entire staff and collaborators then, whose remarkable work, less light than the runners, allowed us to take the first steps of our progress. I also believe, without false modesty, that the arrival of two new titles sponsors for a team of our level is good news for the whole of French cycling.”

Ronan Le Moal, CEO of Crédit Mutuel Arkea: “As the team Fortuneo Bank is a challenger”

“After a period of institutional communication, including TV campaigns, we decided in June 2014 to test sports sponsorship to the Britain-Séché Environnement team. This test was conclusive and we had already given the desire to ramp up in early 2015. Our goal this year by becoming title sponsor, is to increase our brand awareness in France and Belgium through more visibility of course, but that warmth and closeness embodied a cycling team. We are therefore not only there for a communication operation. This sport also shares some of our corporate values: humility, self-denial, the pursuit of profit through long-term work. These values ​​and those of the team soon Fortuneo Vital Concept are in line with ours. As the cycling team, we are in our industry a challenger who aspires to grow, and its construction dynamics resembles ours. ”

Fortuneo Bank, with over 320,000 customers, one of three leaders in online banking in France. Fortuneo Bank is a subsidiary of the banking group Crédit Mutuel Arkea. The brand appeared in the environment of the BSE team in June 2014 by a display on shorts runners and more significantly on early 2015. Since April jerseys, runners also wear at events competed Outre Quiévrain the distinctive logo of the Belgian branch Fortuneo Bank.

Patrice Etienne, CEO Vital Concept: “We want to establish ourselves in Belgium and Germany”

Patrice Etienne (CEO and founder of Vital Concept): “I got to know cycling with my children, competitors at the amateur level. Over time, I invested in the life of VC Country of Loudéac, DN2 club this year which I am both a sponsor and leader. I certainly passionate, but first a boss who sees through professional cycling means to convey the image and brand of my company internationally. Also, we share the same values ​​as cycling internally and with our customers. The desire to succeed is driven by many individual efforts at the service of the collective performance, even if the risks are many. The sports Emmanuel Hubert project attracted me. Vital Concept will, in the coming months, and deployed in neighboring markets, first in Belgium and soon in Germany. There was a logic to partner with an international resonance team, not only through his participation in the Tour de France. ”

Vital Concept is a distance selling business with the agricultural world. Its customers are farmers and herders (for nutrition, hygiene, pet care, seeds and wear parts), professionals in the equine sector (breeders, trainers and equestrian centers) and specialist development and maintenance of the landscape (landscape and local authorities).

In 2016, Vital Concept celebrates its 20th anniversary. In 2015, it has 28,000 clients spread throughout France. 28% of its business now comes from online sales, although its other channels (telephone and direct marketing in particular) are still very powerful.

The team will be riding American Classic wheels for 2016. 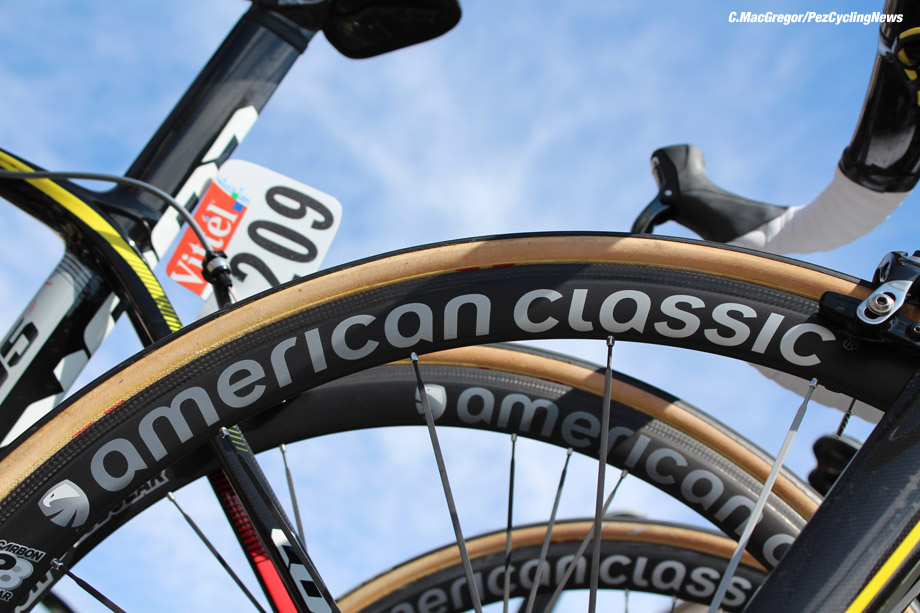