Olds On The Podium In Comeback Race

Shelley Olds proved that she has recovered well from injury, after finishing second in Omloop van Borsele. The American who fractured her ribs six weeks ago used her sprinting prowess as the race finished in a bunch kick to the line to finish just behind Kirsten Wild (Hitec Products).

The race started under windy weather conditions which caused the peloton to split into the several groups. The lead group initially consisted of 18 riders and Bigla Pro Cycling Team was represented by Lotta Lepistö. Eventually the the splits gradually regrouped as the winds died down.

With 10 kilometres left to race, 2013 winner Vera Koedooder went on the attack but the bunch reacted immediately and didn’t give her more than 5 seconds.

“I’m very happy with the result,” Olds said. “I still have some work to do, today wasn’t totally perfect as I was still having pain in my back and ribs and I know it’s going to take time to comeback but I am happy that I was able to race. I was able to stay in the front on this technical route and in the rain so I am happy with that.”

Asked if she expected a result like this so soon after returning from injury, she said, “I know that I’ve been working hard and I knew I had some form. When I race it’s not for training, I always want to be the best I can and I don’t want to race in the back. I knew that if I started today I wanted to race for the win.” 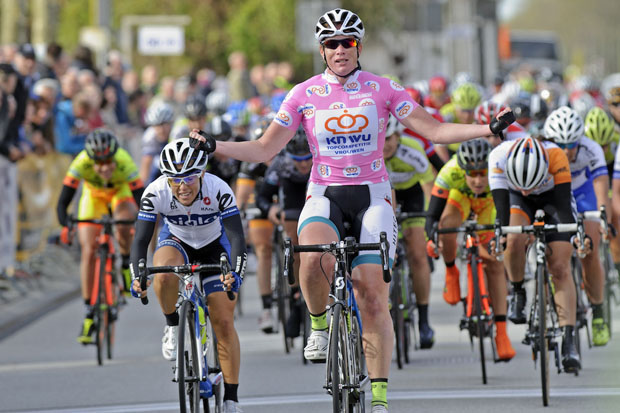