“It’s probably my favorite win of the year by far,” Olds said. “It’s my country and I never get to race here. Now, to see some riders racing over here that I normally see in Europe, it kind of mixes up the whole dynamic of the racing. You don’t just have American style racing or European racing. You have a combination of both. It makes it much more exciting. It was really fun.”

Alé Cipollini set up Olds perfectly, shutting down multiple attacks throughout the day. Olds also played a role in ensuring the bunch sprint by marking an acceleration by UnitedHealthcare Professional Cycling Team’s Alison Powers with two laps to go, and again on the final lap. Erica Allar (Colavita/Fine Cooking Stradalli Women’s Pro Cycling Team) also made her way onto the wheel of Powers, who tried a final time to attack solo on a descent. But even a 10-second advantage was not enough to prevent the bunch finish, as she was caught on the steep section of the final climb that featured a maximum gradient of 10 percent.

“This actually was supposed to be my break after my block in Europe,” Olds said. “But, we found out about this race and it’s really important for our team to be here and race today. I didn’t know how I was going to feel, I’m trying to take sort of a rest from the whole block, but I think the rest did me good last week with my family and now I am kind of fresh.”

Alison Tetrick (TWENTY16 Pro Cycling) won both the “Queen of the Mountain” and the sprint competition after attacking on the second lap and staying away until about two-and-a-half laps remained. She gained as much as a 90-second lead, but an attack by Powers brought a select group to her wheel. But that move was eventually neutralized by the field.

“Our team just wanted to race hard and show Winston-Salem a little bit about women’s cycling,” Tetrick said. “Sometimes you can’t plan for bike racing, when the moment’s right you just go for it. It was pretty early, but it was a beautiful course and a lot of fun to ride. I definitely enjoyed that time. I think this is my first solidified queen of the mountains jersey of my career. I won a sprint jersey on Ronde van Drenthe, so now this is my second of those.”

The UCI/National Racing Calendar (NRC) women’s race was the first of two professional cycling events Friday in Winston-Salem. The 171-kilometer UCI/NRC men’s race featuring 200 starters from 28 teams followed. Racing continues Saturday with professional men’s and women’s criteriums, as well as a pair of gran fondos in the morning and a special USA Cycling criterium in the afternoon preceding the pro races.

More information on all events can be found on the official website, www.winstonsalemcycling.com. There is also an event page on Facebook: www.facebook.com/WSCycling. On Twitter, the Winston-Salem Cycling Classic is tweeting under the handle @WSCycling and using the hashtag “#WinstonCycling” for all events. 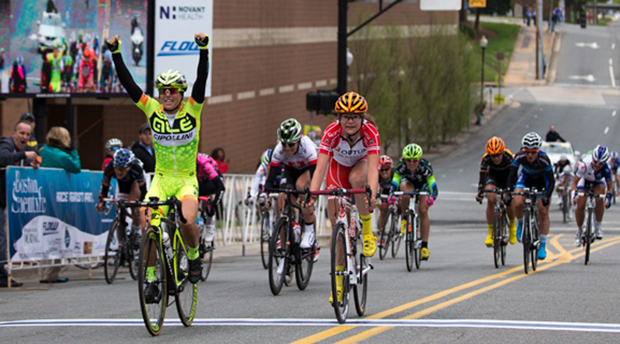