Options abound for Drapac in Iran

A huge block of racing will come to an end when Drapac Professional Cycling take on the UCI 2.1 Tour of Iran next week, the six-stage event beginning in Tabriz on Tuesday June 17.

The team will then have a short break, including an altitude training camp, before going to the Tour of Qinghai Lake in China and the Tour of Utah in the USA.

The Tour of Iran is split with equal opportunity for climbers and sprinters alike and Drapac is sending a squad consisting of Will Clarke, Robbie Hucker, Ben Johnson, Malcolm Rudolph and Bernard Sulzberger. Unfortunately, Wouter Wippert is a late withdrawal from the squad due to a lung infection.

Directeur Sportif Agostino Giramondo said that given the amount of racing the squad has had in recent months, he is optimistic of Drapac snagging results in Iran.

“We can expect the team to be very competitive as all the riders have had a solid build-up of races throughout Asia and America, with some success along the way,” he explained.

Despite Wippert’s absence, Drapac’s sprint hopes remain alive with Malcolm Rudolph who will have the support of Clarke and Sulzberger, the latter coming off a top-20 performance at the Philadelphia Cycling Classic.

“Of course we will look at early breaks that might stick with Hucker and Sulzberger so that when the race hits the hills later in the week hopefully the pair will be in good position to ride for GC,” said Giramondo. “Add in Ben Johnson who is coming into form and he could also be very handy on the hard days whether it’s for stages or for GC to help his teammates.” 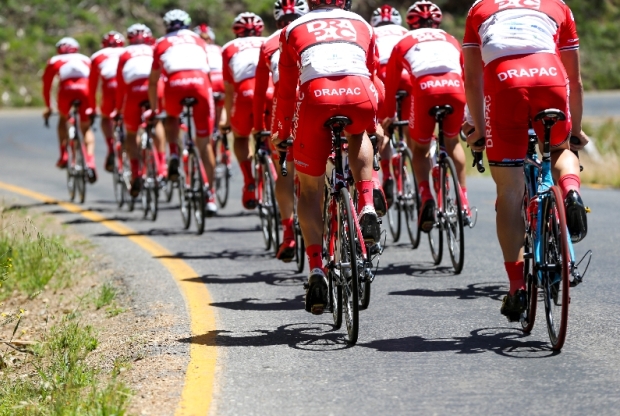 Drapac is set for the Tour of Iran. © Mark Gunter.

Wesemann pipped at the line in Tour de Korea