Loes Gunnewijk narrowly held off the sprinters to solo to victory on the opening stage of the Santos Women’s Cup. Behind Gunnewijk, her ORICA-AIS teammates dominated the sprint with Melissa Hoskins benefiting from Nettie Edmondson’s lead-out to take second place while Edmondson rounded out the podium. It is the second clean sweep of the season for the GreenEDGE family after ORICA-GreenEDGE went 1-2-3 in the men’s time trial at the Australian National Road Championships less than two weeks ago.

“It’s a nice win and a good start of the season for me,” said Gunnewijk, who is registered as an independent rider at the Santos Women’s Cup. “I didn’t have any wins last year, and this year to win already in Adelaide at the start of the Tour Down Under is really special. To have Nettie and Mel on the podium with me makes the win even better.”

The closed circuit criterium on Victoria Drive served as a prelude to the People’s Choice Classic, the men’s race which opens the Santos Tour Down Under. The elite women raced for 35 minutes plus two laps on a new course for the 2014 edition of the race. ORICA-AIS approached the criterium with a clear sense of purpose.

“We wanted to make a nice, aggressive race,” said Sport Director Gene Bates. “Our goal was to have riders in every breakaway. The girls rode fantastically and achieved this. When a break went, we would be in it. It came back, and the next move would be loaded with our riders again. Obviously this was a massive advantage on a course like this.”

Valentina Scandolara was in the first reported move of the day. Shortly after she was brought back to the bunch, Gracie Elvin tried her hand at a solo move. Next, Gunnewijk and Shara Gillow were part of a four rider move that was brought back just before the mid-point of the race.

“Shara and I were away in a move that looked good at first,” explained Gunnewijk. “There was some attacking behind us while were away, and everything came back together. After we were caught, the speed went down a little. We were at the bridge before the last corner, and I thought: ‘Oh, this is the perfect moment.’ That’s when I decided to go.”

“I went full on in that corner,” Gunnewijk continued. “I had a gap right away. I thought I would ride hard and have a look later. I expected to see somebody coming, and I knew if somebody was coming, there would probably be a teammate in the move. With two of us, we could play.”

No one jumped across to Gunnewijk. In fact, the peloton seemed content to allow her to stay away.

“The bunch wasn’t interested in chasing initially,” noted Bates. “By the time they decided to chase, it was too late. There were a couple of crashes that disrupted their efforts. Loes is a former Dutch National Time Trial Champion. Once they allowed her a big gap, they weren’t going to see her again.”

Bridie O’Donnell (TEAM) made a last ditch effort to bridge across to the leader. Jessie MacLean enjoyed a free ride on O’Donnell’s wheel. Although the duo nearly caught Gunnwewijk with three laps left to race, O’Donnell was unable to close the last bit of distance.

“We were preparing for the bunch sprint,” said Edmondson. “We had Loes up the road, and we had Jessie, with one other girl, between the peloton and Loes. She almost stayed away, but it all came back together with 200 metres.”

“By that point, I had Mel on my wheel and I had already opened the sprint,” Edmondson continued. “I had moved up from two or three wheels back to first wheel through the last corner. Mel was on my wheel. Jessie was still just out front after the last corner, but we had to go. Mel came past me with 150 metres. I had to hold on to my speed to make sure I didn’t get in the way of the other riders. It was a bonus to get third.”

“I wanted to celebrate, but I knew the sprinters were just behind,” said Gunnewijk. “I had to be really sure I had the win before I celebrated. I didn’t know I was going to do it until I crossed the line.”

Bates was thrilled with his team’s efforts and extremely satisfied with the ensuing results. The team’s plan centred around Hoskins’ efforts in the sprint. Gunnewijk’s solo victory proved a welcome surprise.

“The plan today was always for Nettie to lead out Mel if it came down to a bunch sprint coming into the finish,” said Bates. “It worked really well. It’s even better that Loes was off the front solo.”

“That’s the beauty of having two strong sprinters,” Bates added. “When one leads out the other, you know you’re getting one of the best lead outs in the bunch.” 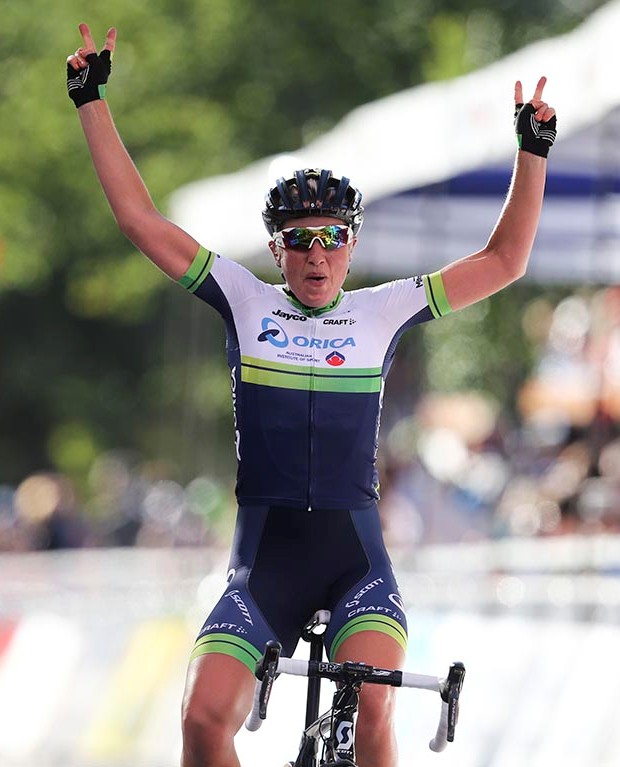