ORICA-GreenEDGE is pleased to announce that Pieter Weening has extended his contract through 2015. The Dutchman joined the Australian outfit in its maiden year after spending the first 12 years of his career with Rabobank. Weening brought with him a wealth of experience and results, which include stage wins at both the Tour de France and the Giro d’Italia.

With ORICA-GreenEDGE, Weening has continued to excel. His Tour of Poland overall victory in early August came as no surprise to those who followed his consistent results throughout the earlier part of the season. Weening finished in the general classification top ten at Eneco Tour and Vuelta Ciclista al Pais Vasco and scored two top ten stage results at the Giro d’Italia.

“It’s great news that we can announce Pieter Weening is staying with the team for a couple more years,” said Sport Director Matt White. “He’s been consistent this whole year with good form from the first race until now. He’s earned a place in the top 20 in the World Tour rankings as a result of his strong results throughout the entire season.”

Weening is happy to return to ORICA-GreenEDGE in part because of the flexibility the team offers him in pursuit of his personal goal.

“I have a lot of freedom to do my own thing and to do the races I like,” said Weening. “I have been really good where I wanted to be good this season so far. Doing my own thing helps me feel valued in this team.”

Beyond personal goals, Weening has also chosen to stay with the team because of the atmosphere and camaraderie. The sentiments that he shared are ones repeated time and time again from everyone within the organisation.

“This is a really good team for me,” said Weening. “Honestly, I just really like it here. The team spirit is the most important thing for me. It’s a team full of fighters. We don’t have a lot of riders on paper who can win big races, but we’re always there. In the team’s first year, people didn’t think we’d get results because we didn’t have a lot of big names, but we did. That’s because of the team spirit.”

Weening’s tenacity and the team atmosphere have proven a winning combination. The 31-year-old believes the team support he has been given allows him shine at the one week races.

“I really like these races because they are the kind of races that suit me most,” added Weening. “In this team, I know I will get support from the other guys. It was with their support that I have been able to achieve some good results this year.”

Don’t be fooled in thinking that Weening only excels at the one week tours. Weening has won a stage at two Grand Tours and has his eye on the third.

“I want to try to win another stage at a Grand Tour,” said Weening. “I already have one at the Tour and the Giro, so hopefully in the next two years I can get one at the Vuelta. To have stage wins at all three Grand Tours would be my dream.”

Although Weening has a suitcase full of experience and has even worn the maglia rosa at the Giro for four days, it’s doubtful that he’s reached his full potential.

“I don’t think we have seen the best yet of him yet,” said White. “Pete has found a good home in OGE and we’re happy to continue that relationship to see how good he can become.” 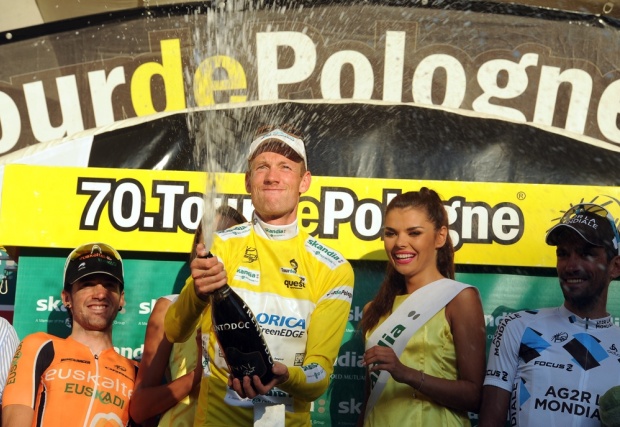