Pieter Weening proved top tactician in a two-up sprint in Sestola to win the ninth stage of the Giro d’Italia. Having spent the day in the early break, Weening attacked the escape group en route to the summit finish. Davide Malacarne (Europcar), sensing the move’s potential bridged across to Weening. The duo held off a spirited chase by their former breakaway companions and the peloton to mountaintop finish.

Weening’s win is a continuation of a brilliant run of success the Australian outfit has enjoyed in the last month including a win at Liège-Bastogne-Liège, three stages wins at the Tour de Romandie, a stage win and the overall victory at Tour of Turkey, a stage win at the Amgen Tour of California, three stage wins at the Giro d’Italia and seven days in the maglia rosa. It is the third Giro d’Italia stage win for Weening, including the team time trial victory last weekend, and the third stage win for ORICA-GreenEDGE at the 97th edition of the Italian Grand Tour.

“The first big goal for the team was the team time trial,” said Weening. “We had quite a bit of pressure on our shoulders for that one. We went in as the pre-race favourites. Being strongest on paper isn’t everything. We still had to do the work to get the result. When we won it, it was a huge relief.”

“Every day in the pink was another win for us,” Weening added. “Then when Bling [Michael Matthews] suddenly wins on the hilltop finish, it felt unreal. It happened again today. It’s easy to see that the pressure isn’t here for us anymore. We can do what we want, and sometimes the nicest things happen when you have that freedom.”

“We’re all very, very happy for Pete,” said White. “He’s a big part of the reason we won Liège. His commitment to the team is obvious. We’ve all seen it over and over again. It’s a really gratifying feeling for all us when the guys that are busting their tails so their teammates can get results can get a win for themselves.”

It took more than an hour for the peloton to allow a breakaway to jump up the road. Fifty kilometres into the stage, Weening found himself amongst a group of 14 that finally received the nod from the bunch. BMC set tempo as the riders in the escape group busied themselves with building up their advantage.

“Today was the first opportunity for guys like me and Santa to go into the break,” noted Weening. “Days like this, the break can stay away if there is no one on the general classification. I think the closest guy was at nine minutes, so we knew we had a chance to go to the finish line. I was in a good group and one of the strongest guys uphill. For me, it was perfect.”

The breakaway steadily stretched the gap on the flatter roads leading to the second, hillier half of the stage. They held eight minutes when they hit the first of three categorised climbs in the final 30 kilometres. Whilst BMC seemed happy to leave the stage to the breakaway, every team did not share the sentiment. Garmin-Sharp sent the entire team to the front to chase. Movistar and Lampre-Merida eventually contributed riders to the effort. At the foot of the summit finish, the break’s advantage had fallen to three minutes.

David Tanner (Belkin) jumped out of the lead group and quickly gained a small solo advantage. The attempt was short-lived. Following Tanner’s catch, Weening made his move, attacking his breakaway companions through a roundabout. Malacarne was the only rider able to respond to Weening’s acceleration, setting off in pursuit of the lone leader. Fifteen kilometres from the finish, Malacarne reached Weening’s wheel.

“I had been thinking about the attack for a few kilometres,” Weening said. “I knew I had to be one of the first to attack. A lot of times when one guy is up the road, the others start looking at each. The cooperation falls apart, and it’s hard to catch the guy who is going full gas up the road.”

“The moment on the roundabout was perfect,” he continued. “The guys took the left side, and I took the right side. The right side was shorter, and I came out with full speed. It was the perfect moment.”

“What I was thinking was exactly what happened,” Weening added. “They all looked around at each other, and then it was too late. In the end, you can never be sure. You can pick the best moment, but you always have to have a little luck, too. I had luck today.”

“After I attacked, I looked back, and I saw Malacarne coming,” Weening explained. “He was riding quite strong. I was on the limit, and I couldn’t open up any more distance between us. I knew if I continued like this for all the climb, I would explode. I decided to wait for him and try to attack him later. I wasn’t sure if I could beat him in a sprint.”

“I tried again at seven kilometres,” Weening said. “It wasn’t an attack but just going hard on the steepest part. He stayed right on my wheel. That’s when I had to change plans and gamble on the sprint.”

In the final kilometre, Weening was the first of the two to significantly reduce his speed. The duo would cat and mouse their way to the finish line with Malacarne eventually flinching first, allowing Weening onto his wheel. It was the perfect position from which to launch a winning sprint.

“I was on his wheel, and I came around him quite easy in the end,” said Weening. “I was stronger in the sprint. I was also quite sure the guys behind us wouldn’t come back, so I wasn’t thinking about them at all. I knew he was still worried about the guys behind. That’s why he was still riding a little bit and why I was just waiting for the sprint.”

It wasn’t all celebratory for the Australian outfit on stage nine of the Giro d’Italia. Michael Matthews suffered a significant crash. Michael Hepburn struggled through the stage following his huge efforts during the first part of the week. Luke Durbridge battled illness.

“We had the first guy to finish and the last three on the road,” said White. “Michael Matthews lost quite a bit of skin in a big crash today, and Durbo has been vomiting since the morning. He’s quite sick. Heppy and Bling had to physically push Durbo over the finish line today. If there was a race tomorrow, he would not be starting.”

“Luckily we have a little time to nurse those three through with the rest day tomorrow,” said White. “It’s quite a contrast for us with the best rider of the day and three guys struggling with for three different reasons.” 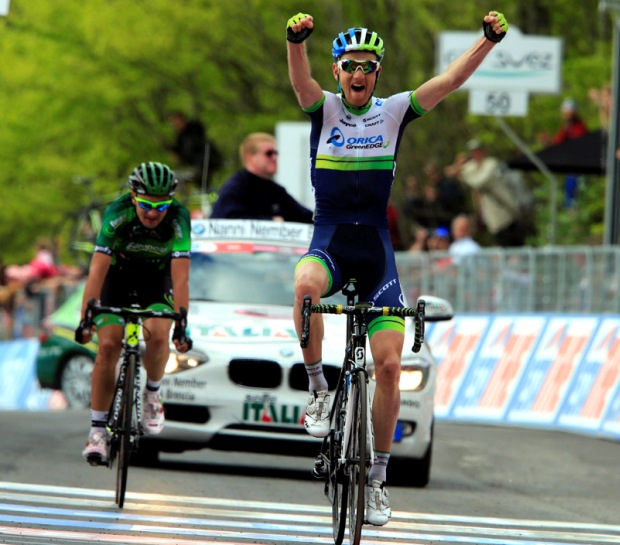