Coupling cycling’s European tradition with the popularity of city-based teams, WCL will introduce Speedtrak™ Cycling, a proprietary bike racing format designed to appeal to on-site and on-line sports fans, at Island 200 in October, 2015. The facility is currently under construction and will be finished this summer, giving WCL a year to prepare and test the new technologies that will be a cornerstone of the League. Amateur racing and development programs will commence as soon as the velodrome is ready to ride this summer. 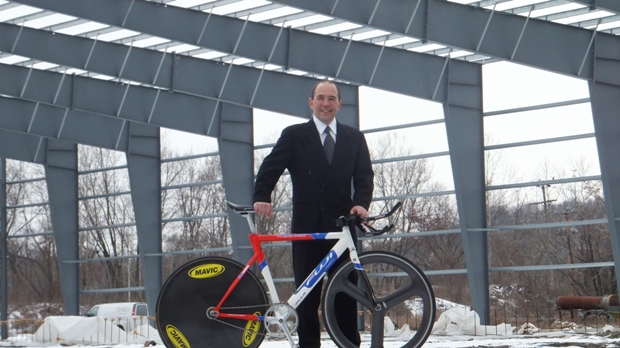 “Part of the process of developing a velodrome is creating consistent programming that will build and sustain fan interest,” said Gottlieb, who not only owns the velodrome but will serve as WCL’s president. “That means selling cycling to a new audience using leading edge techniques like on-board video cameras, live-streaming rider data, an easy to follow point system, season long team competition and heart-pounding sound and lighting. I’m excited that Island 200 will serve as WCL’s production studio and initial League headquarters.”

WCL’s format, Speedtrak™ Cycling will start with one conference, USA East, made up of four venue-identified teams that will be developed at Island 200 over the next year. Each team will be made up of eleven players; six men, three women and two substitutes with all 44 players drafted by WCL following selection trials in first quarter 2015. WCL will run a pilot event at Island 200 in March, 2015 followed by WCL’s first season from October, 2015 to March, 2016. Teams will compete in twelve, 3-day conference meets in a season that takes place between October and March every year. Each day of a three day conference meet features a game of 12 fast moving men’s and women’s cycling races from sprints to two player Madison races, with each race scoring points for the team. The first half of WCL’s 12 meet season will be among the four USA East domestic teams with the second half of the season devoted to USA All-stars vs the World international competition.

WCL Commissioner, John Vande Velde, is instrumental in developing WCL’s innovative format. Vande Velde is a former professional track cyclist and two time Olympian who owned and operated the Vandedrome, a portable track that was used in the 1998 New York Goodwill Games where an early version of Speedtrak™ Cycling was first tested.

WCL’s development team also includes David Chauner, CEO, John Nelson, COO and Mark Bombara, CTO. Chauner has been organizing high profile cycling events for nearly 3 decades and has recently focused on velodrome development and track racing as a sustainable business model for the sport. John Nelson is a business entrepreneur and key developer of eight successful start-up ventures in high growth environments and Mark Bombara has 30 years of experience in the technology industry including building an online community presence for e-Sports events.

“We have assembled an outstanding team to drive WCL,” said Chauner who, along with Vande Velde, is a former Olympic cyclist and U.S. Bicycling Hall of Fame member. “Gottlieb’s $15 million investment to build a state-of-the art velodrome has removed the biggest hurdle in launching the League and, with 18 months to plan, gives us the right amount of time to obtain financing, test systems, line up talent and secure sponsors for the pilot event and subsequent roll out in 2015.”

Which Cycling Events Are Taking Place at the Olympics and When Will They Be?