NetApp-Endura’s Scott Thwaites sprinted out of the lead group today into second place, beaten only by Benjamin Giraud from Team La Pomme Marseille. The tenth stage covered a distance of 191 kilometers from Wuwei to Jingtai, and its outcome was decided by a five-man breakaway group. Mirsamad Poorseyedi Golakhour (Tabriz Petrochemical) continues to lead in the general classification.

The profile for today’s stage offered breakaway riders opportunities to launch attacks and maintain their lead to the finish line. As a result, the beginning of the race was very fast and marked by attacks. The groups were highly competitive, which is why Scott Thwaites initially tried to pull away on his own, but quickly realized that it would be hard going and ultimately a meaningless waste of energy. When the next attack was launched, he went in pursuit and was able to pull away from the field with a couple of other riders. Two more riders joined them, and the group of five managed to build up a considerable lead. The quintet was still out front after the only mountain classification and, thanks to good cooperation among them and a bit of a tailwind, they were able to hold on to their lead to the very end, in spite of the peloton’s chase.

“Together, we took a close look at the profile and decided that we would try out every group, because the chance for a group to make it through was very high. With the exception of Michael, who in any event was supposed to save his energy for a sprint finish, the guys joined every attack until ultimately Scott made it into the decisive group,” Enrico Poitschke explained.

“The breakaway riders worked well together and pulled it off, as they deserved. It’s nice when the team’s work is rewarded with a spot on the podium, and just a few centimeters were the only thing between Scott and victory. But even Michael has regained his strength. He was fourth in the sprint of the chase group. That’s a good sign for the final stages, which aren’t so long and have a flat profile,” Enrico Poitschke added optimistically.

The eleventh stage tomorrow starts and finishes in Yinchuan. It will cover 123 kilometers on a flat urban course. It will include only two sprint classifications. 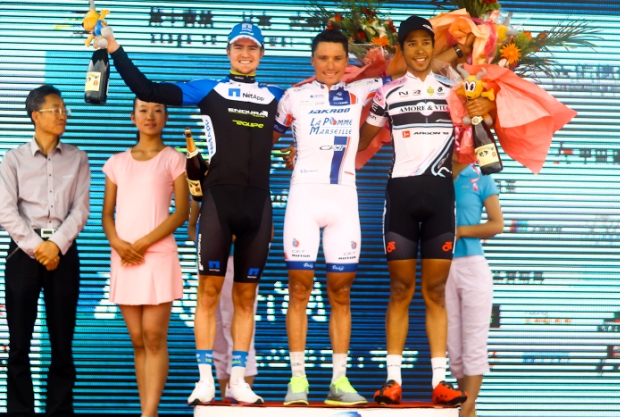