Popular fitness app Kinomap has announced its US launch, with its first-ever video-sharing platform that offers cyclists, runners, and rowers the opportunity to train and compete on simulated outdoor venues. The unique video-sharing technology allows high-performance athletes as well as casual fitness fans to follow pre-existing routes on the app, as well as to upload their own video courses.

Already successful in Europe, Kinomap has added an additional feature in time for its US release. The new feature allows users worldwide to compete in multiplayer game sessions. Contestants can challenge each other live by scheduling their multiplayer sessions directly from the Kinomap app. To further enhance the experience, users can cycle, run, or row in time with the videos or increase their speed and simultaneously increase the video speed, allowing them to intensify their workout.

States Kinomap CEO Laurent Desmons, “With the focus on fitness, especially at the start of the New Year, we’re delighted to offer this unique workout experience. There are miles of amazing video courses on Kinomap and we’ve seen users working out for much longer periods of time than they would without the app. It’s a whole new way to experience a fun, fast-paced workout that decreases boredom and increases engagement.”

Adds Kinomap President Philippe Moity, “Now that we’ve introduced the new interactive multiplayer game feature, users in the Kinomap community can connect directly with one another by joining live sessions every hour to challenge, compete, and share the experience. With the gaming element and the responsive app that you can use anywhere on your phone or tablet, we are confident that Kinomap will be a big success in the US.”

Kinomap users can bike, run, or row on approximately 70,000 miles of user-generated action videos, including the most famous routes from the breathtaking Big Sur ocean ride and Oregon’s Twin Bridges Loop, the French and Italian countryside, and more. The Kinomap app, including the new multiplayer feature, is available now on IOS and Android platforms.

About Kinomap
Kinomap is the world’s first video-sharing platform to offer live-action videos synchronized with corresponding maps. As of January 2018, the site featured approximately 70,000 miles of video courses, enabling users to train on pre-recorded, geo-located outdoor routes with accompanying route maps. Additionally, users can monitor their progress, compare their performance with other athletes, and compete with the Kinomap community using the multiplayer feature. 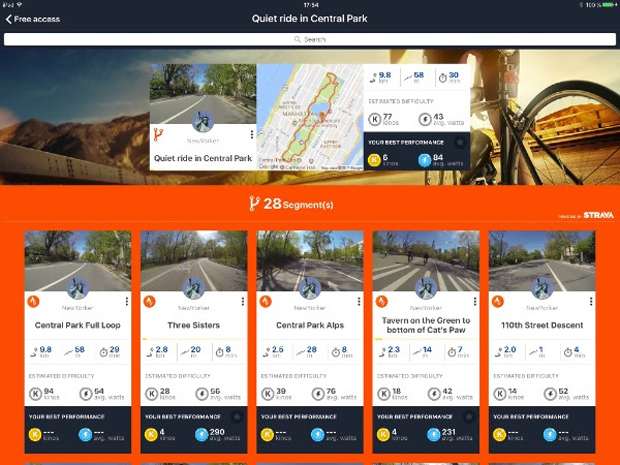