The World Cycling Centre Africa MTN Qhubeka Feeder Team started the 2014 season on Sunday 26 January at the Value Logistics Fast One. The team fielded only three riders, since most of the riders will return to South Africa in February, after having completed service for their national teams at Tropicale Amisa Bongo. Nic Dougall (RSA) and Costa Seibeb (Namibia) lined up with new recruit Oliver Stapleton-Cotton (RSA). This left the team largely outnumbered and without a dedicated sprinter in what is known as the sprinters race.

The Fast One got off to its usual fast start until two riders managed to work themselves into a breakaway which gained a maximum of about 40 seconds on the peloton before being neutralised. Around the 50km mark, Dougall had been following the counter attacks and found himself in a break of three riders with Tyler Day (Westvaal BMC) and former team mate Calvin Beneke (Europcar SA).

The three escapees gained a maximum of 1min 20seconds on the chasing peloton, before a group of nine riders, mainly driven by Team Bonitas, tried to cross over with about 25km remaining. This proved too little too late and the breakaway succeeded with Day (Westvaal BMC) taking the win from Beneke (Europcar SA) and Dougall in third.

Dougall was positive about his third place, saying that he had tried getting away from the two sprinters, but the parcours was simply too flat. “I had some good sensations on the bike today and I’m looking forward to SA Championships and the rest of the season” said Dougall who is preparing for the National Championships.

Seibeb finished in 9th and Stapleton-Cotton just outside the top 10.

With thanks to Volkswagen Commercial Vehicles for getting the team safely to the race. 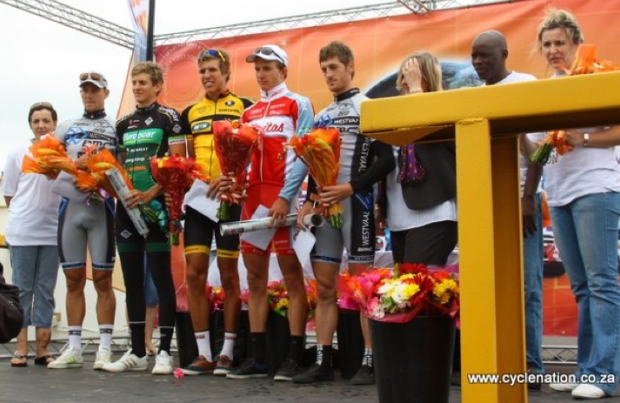 European debut for the Escarabajos at GP Costa degli Etruschi