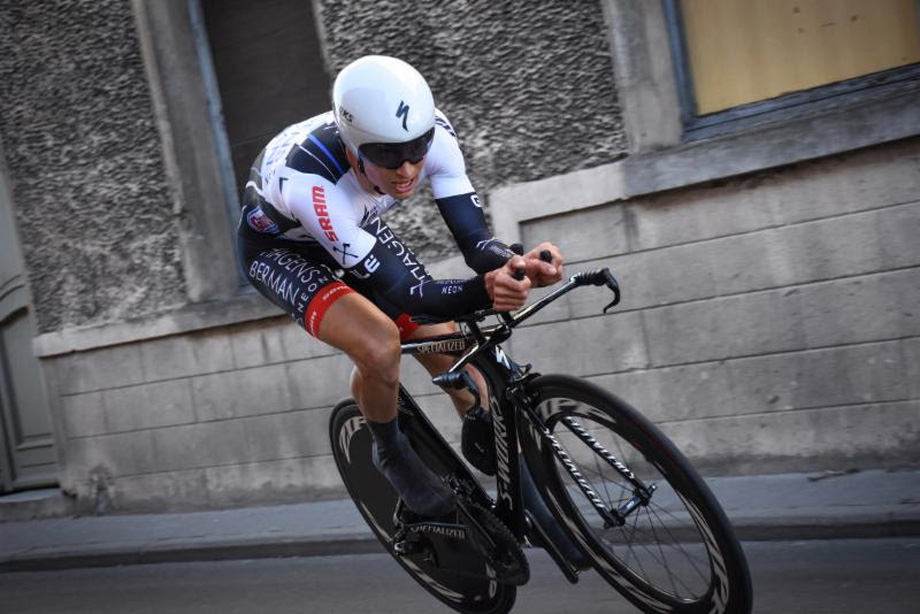 Powless’s win in the 10.3-kilometer race against the clock was his first this year and the fifth victory on the road of the season for Axel Merckx’s Under 23 development squad. The 20-year-old from Roseville, California, powered his Specialized Shiv time trial bike to a time fractions of a second better than Dunbar, the Irish Under 23 national time trial champion.

Powless said he actually would have liked to have raced a longer time trial considering the time gaps were so small.

“But you have to play the cards you are dealt,” he said. “I don’t think my form is quite at its best yet. I am putting out good numbers, but it is not quite as comfortable as I would like it to be. That’s good, though, because there is quite a bit of racing to go in this spring block and I do not want to be on peak form too early.”

Final Stage This Afternoon
Axeon Hagens Berman Sport Director Koos Moerenhout said the impressive 1-2-4 finish did come with the disappointment of having Lawless slip out of the race lead.

“It is a bit of a mixed feeling when you lose the jersey,” Moerenhout said. “But on the other side, everything is still open going into the final stage. It is better to have the jersey than to have to go chase it. But we still have riders who can pull it off.”

Sunday afternoon’s road race is the last of four stages in the three-day race. It travels 60 km from Ath to Chièvres. There, riders will complete two laps of an 18.8-km circuit for a total distance of 97.7 km.

Philipsen leads both Powless, in second, and Dunbar, in third, by 13 seconds with Lawless in sixth, 22 seconds back. Barta sits 10th, 28 seconds back.

Lawless said he was a little nervous before the time trial.

“I think I started out a little bit hard,” the British national criterium said. “And while I am a bit unhappy to lose the jersey, I am quite pleased with how the time trial went, considering the last time I did this one (in 2014), I finished 97th. So that is quite the improvement.”

Barta’s Result A Season-Best
Moerenhout especially highlighted the performance of Barta, who produced his best result of the season and an Under 23 career-best finish in an individual time trial one day after earning “most combative honors.”

“I think Will is a rider who is always up there,” Moerenhout said. “Maybe he is not always as visible as some of the other guys, but he is a really strong rider. He reads the race very well and his performance in the time trial shows he is in good shape at the moment.”

Axeon Hagens Berman’s Ivo Oliveira also produced a respectable result, riding to 11th place, 14 seconds off the winning time. His twin brother, Rui, has a pair of runner-up finishes the past two days competing in the United States at the Joe Martin Stage Race.