Powless said he received a textbook leadout from his teammates at the end of the 175.4-kilometer circuit race that started and ended in Prairie Grove, Arkansas.

“Jonny Brown told me to get on his wheel with 15 kilometers to go and not leave it,” Powless said. “Eventually, Geoffrey Curran, Justin Oien and Phil all made their way up to us as well. With three kilometers to go, Jonny pulled off and Geoffrey and Justin each pulled for a kilometer, keeping the pace up whenever it was needed.”

Inside the final kilometer, two Silber Pro Cycling riders took the front and Powless slotted in behind them, with O’Donnell acting as “sweeper” behind him.

“Phil was fighting off the guys who were trying to jump on my wheel,” Powless said. “One of the Silber riders attacked about 250 meters from the line and went into the final corner really hot. He kind of skidded a little bit and luckily nobody went down. I went from 175 meters and tried to hold it from there.”

“It was great to see the guys ride so selflessly and then see the rewards,” Axeon Hagens Berman Sport Director Jeff Louder said. “Everyone contributed and it was a great team result.”

Before his top 10 finish, O’Donnell represented the team in a 10-man breakaway that formed about an hour into the race. After building as much as a four-minute advantage, the group was caught with about 35 km to go. It was O’Donnell’s second straight day in breakaway.

“After being in the break yesterday, Jeff wanted me to take it easy,” O’Donnell said. “We were headed up the penultimate climb on the loop for the second time and a group started to go with representation from all the major teams. So I figured it would be good to have someone up the road just in case. I was glad I could make the break and then be back to help look after our GC (general classification) intentions. It was awesome for Neilson to land on the podium and to have a top 10 for myself.”

Sunday’s final stage is an 85-minute criterium on a 1.9-km course through the streets of Fayetteville. Never having raced it, Powless said he is going off what he has heard and from looking at last year’s results.

“It looks like a hilly, punchy criterum, so quite a bit different than at Redlands and San Dimas,” he said. “I think it will favor the guys who stick with an explosive pace for an hour and a half. Hopefully there are some fairly large time gaps.” 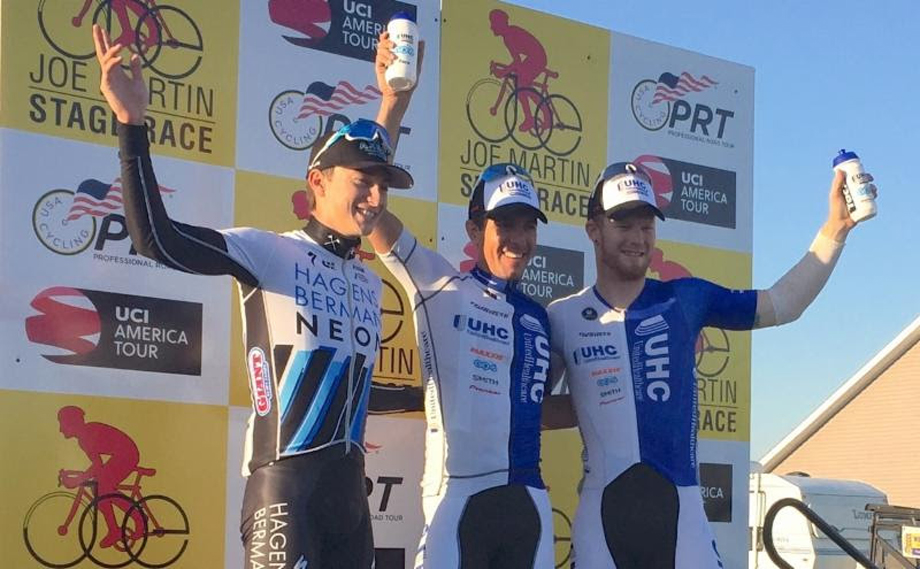