Some of the most important Italian cyclists performed today a reconnaissance on the world championship course in Florence.

Two LAMPRE-MERIDA’s athletes too were members of the group: Filippo Pozzato and Diego Ulissi gave to their Merida bikes a taste of the circuit that on September will designate the new world champion.
With Nibali, Paolini, Aru, Agnoli, Giampaolo Caruso and Visconti, the blue-fuchsia-green duo covered two laps of 16,57 km circuit (total lenght of the race of 279,6 km, start from Lucca for a straight early sector, then 10 laps of the circuit in Florence).

Pozzato’s early impressions: “It has been very useful to pedal on the course, since on the road you can make evaluation that are difficult to elaborate simply studying the map.
There are height difficulties on the course, but I think that the agonistic heat and eventual tactical implications could make the race smooth.
A quite wide group of riders could be in the position of winning the race, but pay attention: anyone who’ll aim to win will need strong legs and a very good fit, otherwise no chance for him.

Of course I’d like to be part of the National team project and I know I’ll need to prove I have the quality I’ve just talked about.
That’s why I think the races I’m going to take part in with LAMPRE-MERIDA during summer will be very important.

Ulissi focused the attention on the key sector of the course: “The hill at 5 km to go could act as a springboard to the victory.
It is the hill of via Salviati, 600 mt at 10 % of average degree and 16 % of max degree and it will be approached after the Fiesole climb and a fast downhill.
Who’ll have enough energies, could choose that moment to attack.

The whole course is very interesting and it’s so beautiful, in a amazing landscape, that I’m sure it will be a very charming world championship”.

LAMPRE-MERIDA sport director, Giuseppe Saronni, received the impressions of the two athletes: “It’s good to see that our riders are very interested in the world championship.
As they reported, it seems that a very top fit will be necessary to be competive in the race.
Our team know well that it will be important that those riders that aim to be part of the National team, will need to prove their competitiveness during summer races: we’ll be able to collect their early feedbacks and we’ll be able to evaluate immediately who could have chances to be protagonist in Florence”. 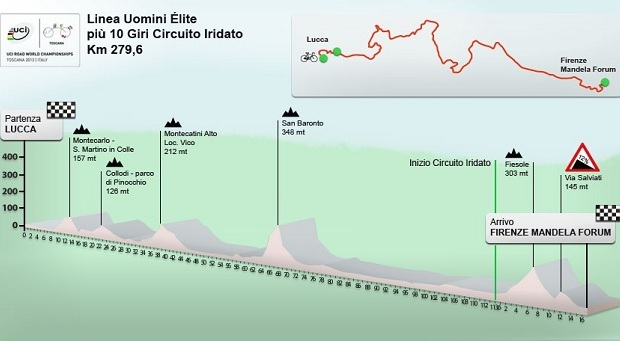