Primal Gives Back More Than One Million Dollars in 2013

Primal, a premier manufacturer of cycling apparel headquartered in Denver, Colorado, donated more than a million dollars back to the cycling community in 2013 as a part of its ongoing commitment to the progression of cycling and cause-related organizations.

Through its dedication to sponsoring events and organizations that benefit people’s lives, Primal contributed more than $300,000 in cash and over $800,000 in product last year alone.

Through its support of more than 80 organizations around the world, Primal’s commitment to community is focused on fostering the growth of cycling through advocacy, charity, conservancy and competition. The company has been a long standing supporter of organizations such as the League of American Bicyclists, Bike MS, NICA, IMBA, Tour de Cure, Bicycle Colorado, People for Bikes, US Military Endurance Sports, Rails to Trails, the Alliance for Biking and Walking and Trips for Kids, among many more.

“Giving back is a part of our culture here at Primal,” said Dave Edwards, founder and president of Primal, “and as we’ve grown we have been able to drastically increase our commitments and support of organizations that make a difference in the cycling community and around the world.”

A major part of Primal’s contributions come through the Primal Gives Back Program, which is open to all teams who participate in a charitable cycling event. Through this program, Primal donates 15% of a team’s total custom order directly back to the company’s fundraising account. In 2013, the Gives Back Program generated more than $169,000 in additional fundraising for events like Pedal the Cause, Pan Mass Challenge, Bike MS, Tour de Cure, Courage Classic and the Dolphins Cycling Challenge.

To join the Primal Community and learn more about what you can do to help advance the cause, visit www.primalwear.com/community. 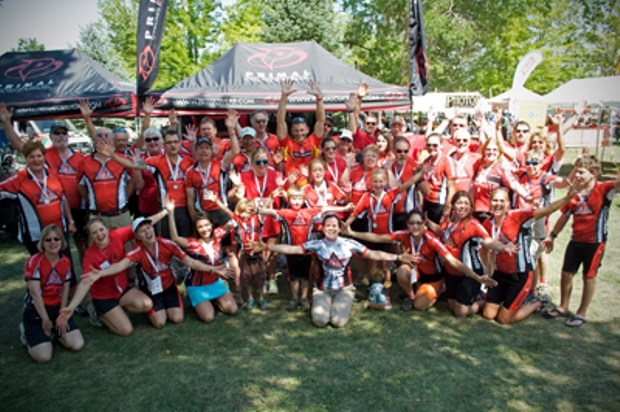 About Primal
Primal, founded in 1992, has emerged as the leading designer and manufacturer of premier cycling apparel for teams, clubs and events around the world. Primal is committed to the progression of cycling for all abilities and is dedicated to promoting and sponsoring events that benefit people’s lives.

Our mission is to provide the highest-quality cycling apparel available while fostering the growth of cycling through competition, community, and advocacy. We believe in cycling as a positive influence globally and are dedicated to increasing the number of people that choose cycling as a means of recreation, environmental conservation and health.