Now that’s what you call a successful debut! Having just joined the Tour de France publicity caravan, McCain and its French fries have already made their mark. In a meeting at the end of the 6th stage of the Tour de France, the Jury for the publicity caravan, consisting of five experts from the sports and marketing world, decided that their Grand Prix would go to McCain and rewarded the novelty, attractiveness and dynamism of the Canadian brand’s contribution along the route of the Tour.

An official supplier to the Tour de France for the very first time, McCain has taken over the leading spot from Carrefour, which won the award in 2013. Second and third places went to Fruit Shoot and X-Tra to make up the podium.

The four vehicles in the McCain caravan were voted top by the Jury for the visual impact of the float and the excellent animation provided by its 16 members. Between 5th and 27th July no less than 250,000 lucky people along the route have the chance of acquiring a McCain carrier bag with the brand’s colours.

The caravan competition also awarded prizes to CFTC and SENSEO, who respectively won the Fans’ Award and the Partners’ Award. 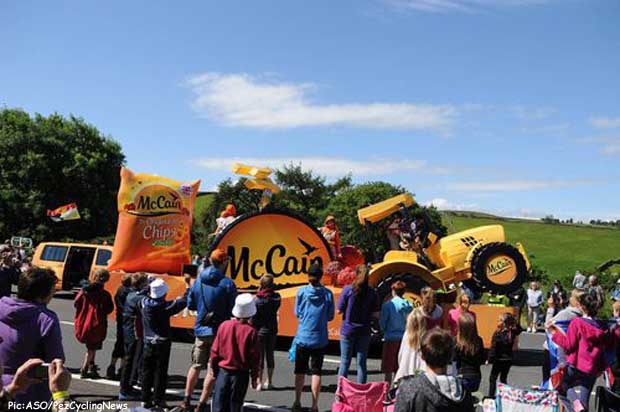 Cervélo Partners With MTN-Qhubeka For 2015