Team MTN-Qhubeka p/b Samsung rides to raise awareness for the Qhubeka foundation. The team is registered as Africa’s first Professional Continental team and proudly carries the Qhubeka brand wherever it races.

“The awareness the team has brought to the charity has completely surpassed my expectations,” said Qhubeka founder, Anthony Fitzhenry. “I was completely surprised by the amount of support. Our objectives are still clear. There’s 12 million children walking to school in South Africa and we want to change that.”

The charity started in 2005 and has since distributed over 40 000 bicycles. It found a child’s commute to school could be reduced by up to 75% with a bicycle. Although, when he first thought of starting the initiative, bicycles weren’t on top of the list for Fitzhenry.

“When we started Qhubeka we wanted to get the Internet into rural areas,” he said.

“What the Internet does is it levels the technology playing field because you could have a child who is sitting in Kwazulu Natal rural area who has got access to the best content in the world with the Internet. The problem we found soon after was a lack of access to schools. Education is the key to building a good life. We found some children were walking to school for up to three hours and were exhausted by the time they got there.”

Fitzhenry says Qhubeka has increased its capability by joining forces with World Bicycle Relief. Qhubeka worked with WBR sourcing bicycles and bicycle parts in the past and this year formalized the relationship to work towards a common goal.

“In partnering with World Bicycle Relief, Qhubeka has become a global organization. We’re much bigger now in that there’s a head office in Chicago with engineers in China where people manage the supply chain. It gives us much more capability and longer sustainability.”

“My view has always been that charities with common goals should not be working against each other but should be working together and leverage their resource.”

What surprised him the most in the last few years was the willingness by big companies to support Qhubeka.

“We’ve been delighted at the major brands in the world who’ve come on board. People like MTN and Coca-Cola getting involved is really good for us. The goals are still the same. We’ve learnt a lot of things along the way. Going forward, we’d like to get more government support too,” Fitzhenry concluded. 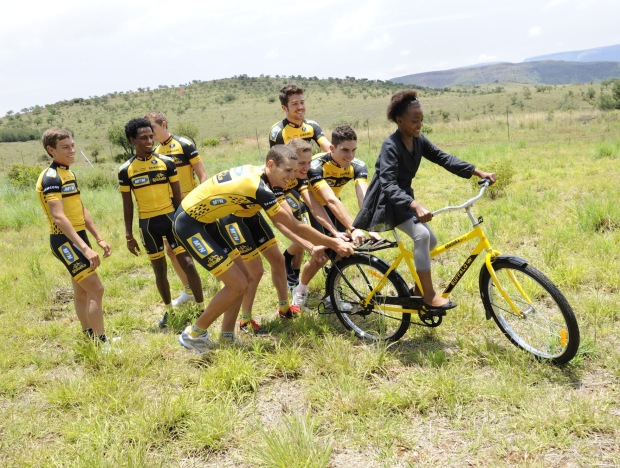 Lotto Belisol: Kenny Dehaes looks back on a successful season