Quintana (6th) defends himself at mountainous ITT in Chorges to strengthen his lead in Young Riders’ competition, now 2.07 from GC podium. Valverde (5th) confirms great condition before the Alps.

After the biggest joy of the race to date with Rui Costa’s win in Gap, the Movistar Team confirmed themselves as one of the crucial factors of the remainder of the 2013 Tour de France, as their two references for the mountains shone in the demanding ITT -32km between Embrun and Chorges, with two Cat-2 climbs- opening the cycle of Alpine stages in the race. Nairo Quintana consolidated his lead in the Young riders’ competition after clocking the 6th fastest time of the day, in a route with technical descents and intermittent that saw race leader Chris Froome (SKY) claiming his third success in the race. In turn, Quintana defended himself in a difficult course for him and lost one minute on his main rivals for the podium of the race, now 2.07 ahead of the Colombian.

The other positive note of the day was brought by Alejandro Valverde, showing strength again as he entered the fight for the stage win, clocking top times in all intermediate references and paying a short visit to the hot seat to end up in 5th spot, just 30 seconds behind Froome. The Spaniard looks with great optimism towards the Alps, starting tomorrow with one of the hardest stages in this year’s Tour: 172km from Gap to the mythical summit of Alpe d’Huez (HC), including a first passage together with the Col de Sarenne (Cat-2) after three rated climbs in the beginning of the day.

REACTIONS:
Nairo Quintana: “I did a fine TT, though it might have been not my best day when it comes to feelings. Since I did the recon this morning, I already knew the parcours suited me, and that’s why I’m not fully satisfied with this result. It’s true that the riders who beat me are all strong – also, I gained some time on the fight for white, and we took some on other GC contenders. At the second climb I could pick up the pace and felt better, but it was raining a bit in the final descent and I had to grab the brakes more than usual, because I didn’t want to take too many risks. I lost a bit of time there, but I hope to recover it in the upcoming stages.

“The days are taking its toll on my recovery, but also make me more mature – you get to assume better these tiredness after three weeks of racing. Yesterday’s was a really nervous stage, fast from the start, but I could still keep the wheel of the top guys – that makes me feel more confident. I hope not to lose time in the three mountain stages remaining and stay into a good position overall as I am right now. I think tomorrow’s stage is the one that favours me the most. It’s probably the Queen stage in this year’s Tour, and I’m confident the legs will respond as I want. I saw many people along the route with Colombian flags, lots of them coming here to support me – that makes me happy, mentally strong. I will give everything for this team and my country in these three days left to Paris.”

Alejandro Valverde: “I’m satisfied because I did a good TT. I was a bit unlucky: the road was more slippery for me than for the late starters, but you can’t complain – you must stay happy because you were able to be up-front again. I had already come to see the route before the Tour and I knew it was a parcours that suited me to perfection. I thought: ‘If I’m strong enough, I might be battling for victory’. That’s how it was today: shouldn’t I have lost those 25 seconds into the first descent, I would have been contesting the win with Froome, Contador and Purito. My feelings during the race were really good, right from the start, and I could ride strong into both climbs. It’s true that you always give a bit more when you’re fighting for the overall podium, but I gave 100% today and, without the time I lost with the mechanical on stage 13, I would be into the GC podium.

“I’m doing fine and I’ll try and win one of the three mountain stage remaining, but I kept clear in my mind it will be difficult: those riders ahead of the in the overall will want to keep their places if I make it into any break, and it will be difficult for an escape to stay away if I’m in. I like all three stages – tomorrow’s will be a crazy stage, with lots of attacks for the breakaway. It would be important for me to win a stage, but would be really happy if I can work for Nairo so he gets into podium places.” 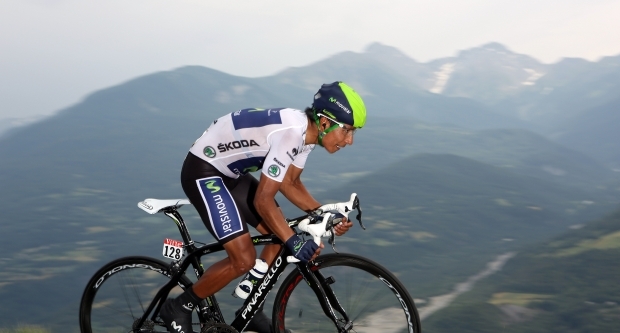