Both Movistar Team leaders confident towards 69th edition of Vuelta a España, starting tomorrow in Jerez de la Frontera with its strongest field in recent years.

All nine Movistar Team have landed in Jerez and are ready for tomorrow’s depart of the 69th Vuelta a España. The final Grand Tour of the season will roll off the ramp in Jerez for a 12.6km team time trial -which the Blues will start in last place at 20.28h local- where the squad directed by José Luis Arrieta and Chente García Acosta will seek for a repetition of success in 2012, where they claimed the first stage win in front of their home crowds in Pamplona and took Jonathan Castroviejo into the lead. The Basque rider will play a crucial role into a Movistar Team roster which also includes José Herrada, Javi Moreno, Adriano Malori, Andrey Amador, Imanol Erviti, Gorka Izagirre and two of the biggest favourites for overall glory: the reigning champion of the Giro d’Italia, Nairo Quintana, and current UCI WorldTour no. 1, Alejandro Valverde. There are the thoughts from the telephone squad’s two leaders with 24 hours from the beginning of the race:

Nairo Quintana: “We’ve got two leaders and we will fight so the title stays within the team. The race will make things clear: should Alejandro do better, we will help him out, and if it’s the other way around, the team as well as him will all race for me. The only important thing is seeing Movistar win, no matter if it’s him or myself. We’re team-mates, not rivals; this is a collective effort. It makes me really confident to have Alejandro by my side, plus such a strong squad. I’m coming here in good form – maybe not as good as I’d like, though. I only raced in Burgos after the Giro, and even though winning there was a nice boost of confidence, the beginning of the race might be a challenge for me, not having such a strong racing firm like others. I took sort of rest in Pamplona this week, yet I also did some intense training – however, the main work had been done in the months prior to the race, training in Colombia. We’ll see how we feel from tomorrow on.

“It’s going to be one of the strongest Vueltas in years, with all big stageracing names in, and that makes the race even more important and attractive. As well as Alejandro, I think Joaquím Rodríguez will come into this race really well – he took the Tour as a training race and will surely have the legs here. I count Contador in: if he’s come to the race, it’s probably because he feels competitive. The same goes for Froome, who had the Tour written down as his biggest goal of the season and had to focus on the Vuelta after his abandon. Then, there are some youngsters that can do well. The route suits me well, but also does for the other favourites, since we all are pretty much accustomed to such mountains. I did a recon of some stages, but it won’t be before the real racing when we know if it’s a really good parcours for me or not. There will be a big competition between all of us: let’s hope to bring some spectacle so the fans can enjoy.”

Alejandro Valverde: “I’ve got full motivation for this race, and also a great team around me. We’ve got Nairo, too, and we’ve got a good chance so the Movistar Team keeps the title. That’s our goal for the race. Should I be able to snatch some stage victories, it will be much better, but the priority for us is the GC. After the Tour and San Sebastián I didn’t enter any other competitions, but I think I recovered well after all efforts in July, with these three weeks of rest. I won’t know how I really stand before the race itself – it will indeed tell us who our leader will be. I’m starting the race with the biggest expectations, but it’s obvious that Nairo is a stronger guarantee for this race, as he could prepare for it better. Last year in the Tour, after misfortune with that mechanical, I already focused on helping him out, and if I had to do it again, it won’t be difficult for me. I’ve spent 11 years keeping all pressure of leading a squad on my shoulders, and not having it also makes me happy. There won’t be any problems with it – we two will get on.

“I’m not thinking of the Worlds at this moment – it all depends on how the Vuelta goes for us: we don’t know if I’ll be contesting the win, helping Nairo out, fighting for stage wins… The same goes for the WorldTour ranking. Those are things you keep on your mind, but my only real goal at the moment is trying to win the Vuelta. The field of contenders is excellent. Purito comes in good form after preparing himself in the Tour, Nairo is also doing well, Froome and Alberto are willing to do well after suffering those crashes in the Tour… The organisers have gone for a spectacular route, an exciting one, and that’s always good for cycling. The last week will be especially hard and any day could decide the GC, but you can’t save energy for it: there are important stages right from the start. To be honest, there’s no place like the Vuelta: I feel really comfortable here and enjoy bike racing like in no other place.” 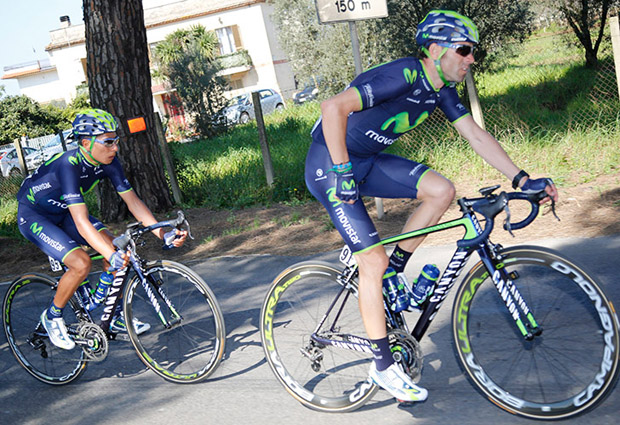 Maxime Monfort and Jens Debusschere give their preview of the Vuelta