Imperia, February 28, 2014 – As a result of the poor weather conditions, which have rocked the Liguria Region during recent months, RCS Sport has been forced to change the Milano – Sanremo race route and cut out the ascent to Pompeiana.

The decision was made today in agreement with the Prefecture, during a meeting with the Province of Imperia, the Anas and the Traffic Police. The roads to the top of the Pompeiana are already closed and there simply is not enough time to repair the damage on the roads and make sure they are ready for 23rd March when the “Classicissima” is due to take place, especially since the weather conditions are continuing to be bad.

The new race profile is almost identical to the one in 2007 (294 km) when Oscar Freire won, and will once again be most suited to the Sprinters.

Mauro Vegni, Head of RCS Sport Cycling, said: “We met our interlocutors of the Prefecture and the Province of Imperia, to work out whether it would be possible to keep the original race route, including the ascent of the Pompeiana.

“In view of the current weather conditions, and also considering the damage that the bad weather has caused in recent months, we felt that there was no way we could secure the roads in time for the race.

“I’d like to thank the Institutions for their help. Thanks to their work, we’ve been able to announce the route change today so that riders, teams and everyone involved in the event has time to take on-board the alterations.

“The race route planned for this year (including Pompeiana climb), will be repeated in the next, hoping not to encounter the same problems even in 2015.” 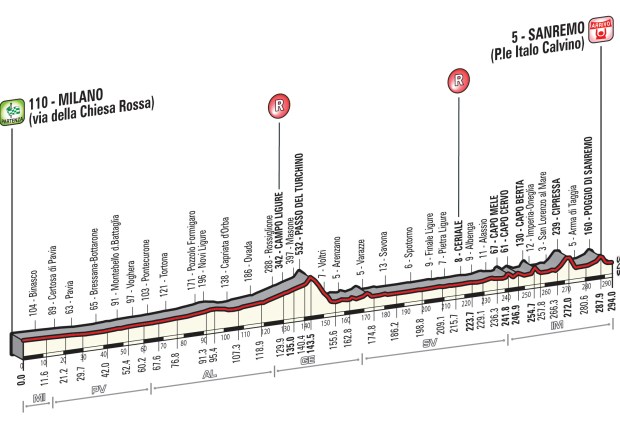