Rapha Condor JLT’s Ed Laverack added a national title to the team’s list of successes in 2014 by taking an unexpected win in the National U23 Road Race Championships on Sunday.

Nineteen year-old Laverack, who is only in his second season of full time riding, finished in a select chase group behind the main break of the day that decided the win in the Elite championship, won by Sky’s Peter Kennaugh. With the two titles being run together, Laverack’s 13th place in the main event was enough to see the young Welshman take the U23 title.

Team manager John Herety commented,
“We went in to the race targeting the podium in the Elite race with Kristian, and to try to win the U23 title. We knew that Sky would put numbers up the road and our plan was to try to be in that move but when it went the guys couldn’t match it.

“Once that group was down the road with a number of strong riders in it the podium in the Elite race was effectively out of our grasp, so we focused solely on racing for the U23 title.”

“We had thought that Hugh Carthy would be our best bet, but he wasn’t on a great day and instead it was Ed who was flying. It ended up a pretty tough contest for the title, as there were a few young guys from Zappi’s who rode really well, and pushed us right to the end.”

Laverack, who hails from Llanelli, was on home turf on the tough Abergavenny circuit, and he showed his quality by finding his way into a group including pre-race favourite Geraint Thomas that chased hard behind the leading eight riders on the tough finish circuit.

It is the second National U23 title for the Men in Black following Mike Cuming’s win in the 2012 championships. For John Herety taking the title with a relatively unheralded rider was confirmation of the depth of quality in his young squad.

“It is an important title for our team to win. We have a lot of young guys and we are focused on developing these riders. We’ve a number of U23’s who are coming through this year and I am really pleased that Ed has been able to show his talent.”

The team’s next race will be the Otley Grand Prix this coming Wednesday. 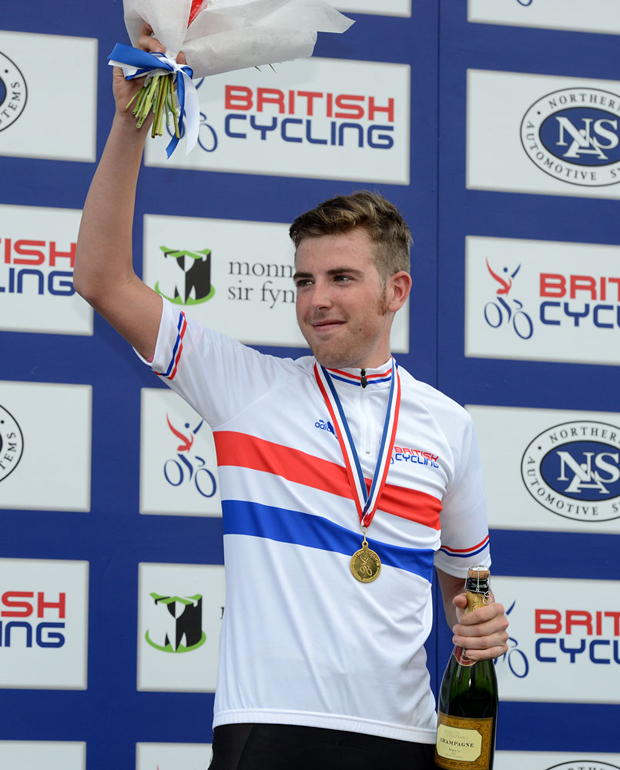 Ershov’s bronze into RusVelo medal collection at the Russian nationals