Tom Moses came within a whisker of taking a brilliant victory in the Lincoln Grand Prix yesterday, after a depleted Rapha Condor JLT team delivered him to an excellent position in the final of Britain’s most coveted one-day race.

Due to a continued period of illness and injury, which has taken seven riders out of competition, the Men in Black were forced to start the day with just four riders. The four-man squad rode exceptionally however, putting all four men into the nineteen-rider break that went clear on the second of the large circuits, which had been added to the route this year.

Moses then split the group with six of the traditional 10km city centre laps remaining, taking just five riders with him. When momentum started to lag in the group with just 20km to go, the 22 year-old Yorkshireman made a solo bid for victory.

“I knew that it was early, but I was a bit worried about another group that was coming up from behind and had closed to 18 seconds. I got a gap on the climb and over the top I had pulled clear, so I thought I’d just put my head down and go for it.”

Moses had been unlucky that his in-form teammate Graham Briggs, who had also been in the group, was knocked off his bike by a spectator, and had been forced to abandon.

Moses soon puled out a thirty-second advantage, and but the windy conditions and long straight roads on the back of the finish circuit meant that the rest of the group refused to give up hope of catching him. After 20km alone, Moses was eventually caught at the foot of the final ascent of Michelgate, 400m from the line.

“It was just too far. I was seeing stars by the time I got to the final climb. I had a handful of seconds under the kilometer banner, but they could see me then and I had nothing more to give.”

Moses had the consolation of picking up the U23 prize, as well as the Brian Cossavella Trophy Michelgate trophy for the king of the hills competition.

Elsewhere Hugh Carthy was the standout performer for the team at the Tour d’Azerbaijan last week. The twenty year old rode admirably against tough competition to finish 13th on the toughest stage of the race, won by Linus Gerdemann of MTN Qhubeka. 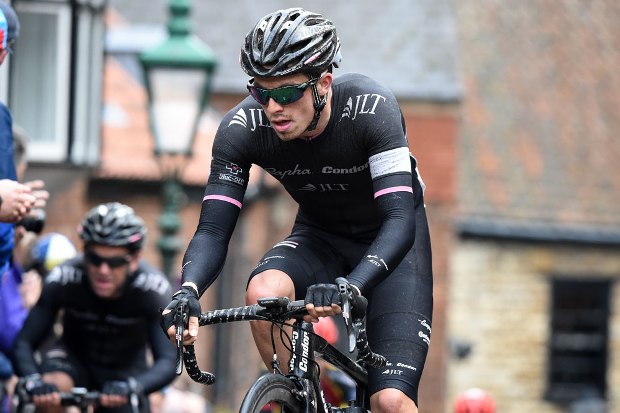