The five surviving members of the Rapha Condor JLT team enjoyed a trouble free day, as the Tour of Britain wrapped up with a spectacular stage around the nations capital yesterday.

After eight tough days of racing the young members of the development focused team were satisfied with a strong showing in their national tour, with Richard Handley finishing the race as the highest placed domestic rider in 16th place overall.

Team manager John Herety commented after the finish of the final stage,

“For me the race was confirmation of where Rich is as a rider: he was just behind that small front group on the toughest days which, considering the caliber of riders in the group, is about right.”

“It was tough losing Hugh quite early, and Mike couldn’t replicate his form from earlier in the year when he won the Tour of Korea, but for us it was important that we got two of our youngest riders, Will Stephenson and Luke Mellor, through the race. That should give them a lot of confidence going into next season.”

While the young members of the team had to be satisfied with slightly low-key performances, team leader Kristian House’s attacking display over the final few days netted him the prize for the overall most aggressive rider, for the second year running. House had been in stage long breaks on the first, sixth and seventh stages, and proved to be one of the races most popular riders.

“This is our biggest race of the year and so you’ve got to try for something, you know. This year the fans have been unbelievable. On the stage in Surrey in particular, the crowd were just amazing, and they were really behind me. It was as good, if not better than the biggest races I’ve done in Europe.”

The Tour of Britain is the team’s last official race for the 2013 season. Riders will now take a deserved break before looking to start their build up for next season. 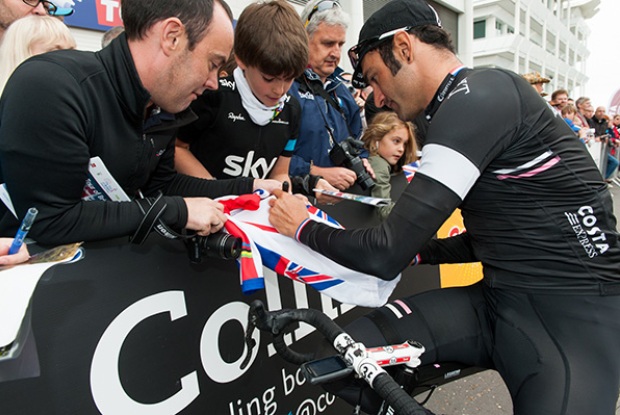