Despite the racing being controlled by Bradley Wiggins’ Team Sky, Rapha Condor JLT have continued to fight on bravely at the Tour of Britain, with both Kristian House and Richard Handley getting involved in the action.

On stage five to Caerphilly, Handley made a bid to chase down Tour de France King of the Mountains Nairo Quintana when he attacked on the first passage of Caerphilly Mountain.

Handley hadn’t planned on attacking, but took the initiative in what he knew would be a tough finale.

“I wasn’t planning on going after Quintana when he went the first time, but there was a bit of a lull and I tried to carry on my speed into the climb so I didn’t have to kick when they did attack.”

After following the leaders over the second ascent where Dan Martin made a huge bid for victory Handley eventually finished the stage well placed in the second group on the road, just a handful of seconds behind the winning break.

Since the race took shape following the stage three time trial, the team’s focus has been to look to try to keep Handley in the best position overall, and use Kristian House to try to get into any dangerous moves.

On stage six across Devon to Haytor the ever-aggressive House escaped with four other riders after a rapid start had split the race into several groups. House, who had also featured in a long escape on stage one, knew that the chances of success were limited, but was keen once again to be part of the action.

“The race has been pretty controlled, and no breaks have made it yet. But you’ve got to keep trying, and at the end of the day if I’m in the front it is taking the pressure off Rich and the boys in the bunch. Besides, you never know when it will stick, and we need to be there for that when and if it does.”

The break arrived at the foot of the final climb to Haytor – the race’s first ever summit finish – with a slight advantage over a Sky led peloton. However when the hostilities began the leaders were soon swept up, as riders of the caliber of Martin and Quintana tried their luck once again.

While the race was split asunder, Handley hung on to the front group until the final kilometer when the accelerations of the leaders split the group. Handley eventually finished 13th on the stage and moved up to a solid 16th place overall.

The race continues tomorrow with a stage around Surrey before heading to London on Sunday for the final stage. 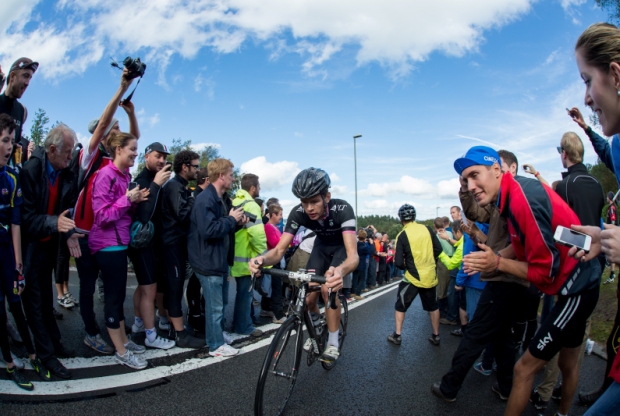