Rapha Condor JLT’s Ed Clancy sprinted to victory last night in the fourth stage of Pearl Izumi Tour Series in Aberystwyth. Clancy has now won in Wales two out of the three times he has raced there, making it three wins in four visits for the Men in Black in the coastal town.

The double Olympic Champion looked in brilliant form as he broke from the peloton early on, finding himself with three other riders. On a course which had been revised due to bad weather, the four strong group pulled out a nearly a minute on the peloton making it clear that there was every chance they were going to go the distance. Rapha Condor JLT’s team leader, Kristian House, who won the bunch sprint for fifth, said that the race could hardly have gone better.

“Things almost went perfectly tonight. Once Ed was away Jimmy (McCallum) and I got to the front of the bunch and made sure we controlled the race, because we knew that Ed would be the fastest of the four man break.”

At the business end Clancy showed no problems in answering the faith put in him by House. Despite attempts by second placed Chris Opie to drop others on a leg-busting final lap, Clancy was able to power out of the final corner and to victory. His exploits won him the Costa Express Fastest Lap with a time of one minute and ten seconds.

Unfortunately though, behind McCallum crashed out, leaving House with too much to do to ensure the overall targeted aim of a team victory. Even so, Clancy’s individual effort and House’s 5th place were enough to give the Men in Black 4th place in the overall standings.

House said it was a shame that such an opportunity has gone wanting. “It’s tough, we would have liked to have taken our first team win tonight, but it is good to take the win with Ed. We are more focused on taking the wins, and we will see where we are with the overall in a week’s time.”

Combined with House’s solo win in Durham, Clancy’s victory makes two stage wins for Rapha Condor JLT in four races. Clancy’s victory surely shows that with more of the same, the sought-after team victory is only around the corner.

The next race in the series is in Torquay on Tuesday 28th May, and highlights of Round Four in Aberystwyth can be seen on ITV4 at 10pm on Monday 27th May. 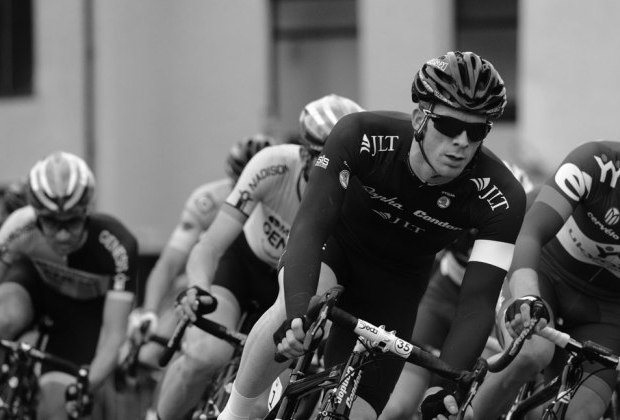