Meet The Cheetah:
From New York City bike messenger to hero of road and track, the story of Nelson Vails is one of cycling’s most vibrant.

Rapha is proud to honor the career of Nelson “The Cheetah” Vails with his own Special Edition Collection. Vails, from New York City, captured the imagination of a generation of cycling fans with a string of thrilling victories in the ‘80s and early ‘90s.

Vails was the first African-American cyclist to win an Olympic medal, earning silver in the match sprint at the 1984 games in Los Angeles. He was inducted into the cycling hall of fame in 2009 and has remained a prominent figure since retiring, frequently commentating on televised races.

Using the Toga Tempo Thunder Bolt deep green-and-gold color scheme as a palette, we’ve incorporated a thunderbolt logo onto each item in the collection, and created a Tempo logo for the jersey and bib shorts.

To promote the collection, Nelson Vails will speak at several Rapha Clubhouses across North America, where he will meet fans and tell the story of a cycling career that took him from a New York City bicycle messenger to Olympic athlete.

The Nelson Vails collection will be available on rapha.cc to Rapha Cycle Club members on
Wednesday, April 24, and to the public on Thursday, April 25. The collection is also available at Rapha club houses and at Toga Cycles. 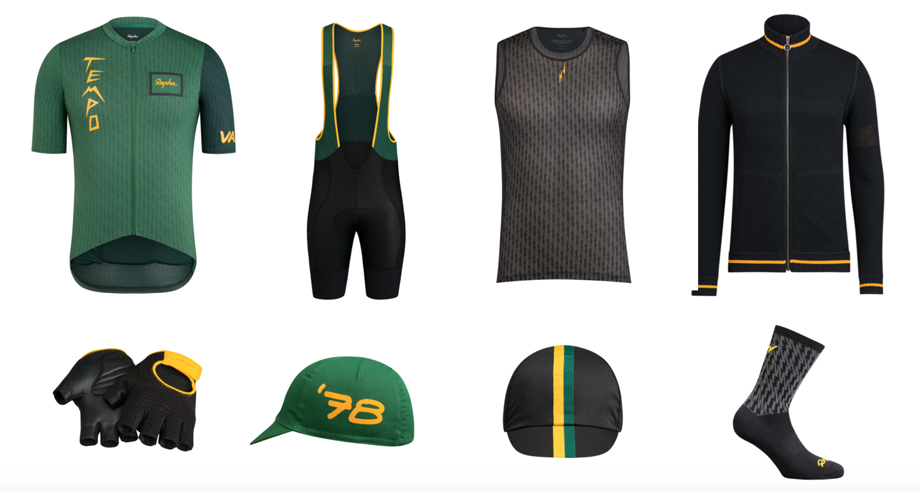 About Rapha
Rapha was established in 2004 to address a need for stylish, high performance cycling clothing. It now provides products for every cyclist and continues to push the boundaries of innovation in cycle wear. Alongside this, Rapha has cultivated a global community of passionate riders who come together as members of the Rapha Cycling Club (RCC), the largest club of its kind in the world. Rapha’s retail model and unique brand values come to life in its many rides and events and global network of Clubhouses that combine retail, cafés and cycling culture all under the same roof.