Hugh Carthy capped an excellent week at the Tour of Japan for Rapha Condor JLT, finishing sixth overall and winning both the KOM and the U23 jersey in the 2.1 ranked event.

After his brilliant performance to take second on Mount Fuji on Friday, Carthy was the only rider who could manage to stay with the attacks of a very determined Tabriz Petrochemical team when they decimated the field on the tough Izu stage the following day.

Carthy started the stage just two points down on the KOM jersey and set out to be involved in the action from the off, joining a five man break that went clear on the first lap. As the pace increased over the following laps, the break was reduced to just two Tabriz Petrochemical riders and Carthy, who managed to return to the leaders despite puncturing as pressure was being applied in the group.

Despite a strong chase coming from a number of teams in the peloton, the leading trio continued to pull clear of the bunch.

“We came out to try and win the stage at Izu. We knew we had to make it as hard as possible to give our team the bets chance. After Fuji I knew I was going well, so I went into the first move to try to take the KOM.”

“For a long time I didn’t think that the move could possibly go all the way, the Iranian who was second on GC was there, so I knew the bunch had to chase. The circuit was just so hard though that the bunch fell part behind and the gap just kept growing.”

“I was thinking about the KOM first, as I knew the stage would be hard to win against two guys from the same team. As it was we stayed together but when it came to the finish I didn’t have the legs to get past (stage winner) Mizbahni.”

While Carthy took a very strong second on the stage, the pace set by the leading trio was so fast that forty-four riders would be eliminated at the end of the day.

The final stage in Tokyo on Sunday saw Carthy and his teammates finish safely in the bunch. At the end of a very tough week of racing, Carthy was naturally pleased with his performance and that of the team.

“I am happy with this week really. I made a bit of a mistake tactically early on when I attacked from too far out on the third road stage and lost a bit of time. But the whole team was really strong all week and we rallied round and came back with some aggressive racing. This is the biggest result of my career so far, and now I want to get on to the next one.”

Carthy will now have a short rest in the UK before returning to Asia to take part in the Tour of Korea, which was won by Rapha Condor JLT’s Mike Cuming last year.

At home Graham Briggs continued the Men in Black’s amazing run of form, by winning the Milk Race in Nottingham. Briggs easily outsprinted his two breakaway rivals at the end of the one hour criterium, to make it two wins out of two in the revived UK event following Felix English’s victory last year. 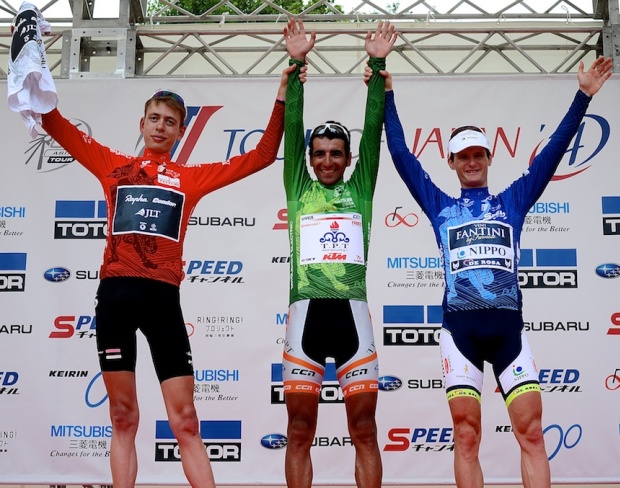