A tough few days of racing in the Australian heat ended on a high for Rapha Condor JLT, when Felix English scored third place in the bunch sprint that decided the third stage of the Jayco Herald Sun Tour.

Following English’s fourth place finish in the prologue, on stages one and two the Rapha Condor JLT riders suffered with the heat and terrain, missing the move the decided the overall classification, on stage one.

The Men In Black bounced back on stage three however, when the team rallied together to ride an almost perfect stage, putting youngster Hugh Carthy into the day long break and then organising an excellent leadout, to deliver English into the final sprint.

Team manager John Herety commented, “It was very frustrating to miss the move that decided the overall on stage one. I spoke to the guys after that and told them there were no excuses, really. Stage two to Bendigo was another tough day for them, but on stage three they proved what they could do, and really turned their race around.”

“Hugh took the pressure off by making the move, but with Orica GreenEDGE very much in control of the race, it was always likely to come back to a sprint.”

“It was a very messy sprint in the end, but the boys committed to doing the lead out for Felix, and they did a great job.”

For English himself it was yet another confidence boosting result against top World Tour competition.

“I was really happy to take third here. The prologue was a big target for me, as I knew I could do well there, but I wanted to do something on one of the road stages too. We really pulled it together on stage three, the boys looked after me all day in the bunch, and the leadout was a massive help in such a messy finish.”

Despite being billed as the penultimate stage, stage three would prove to be the last chance that the team would have to get a result, as the fourth and final stage to Arthur’s Seat was cancelled due to high temperatures and winds.

The team now flies back to the UK this week to begin their final preparation for the European racing season. 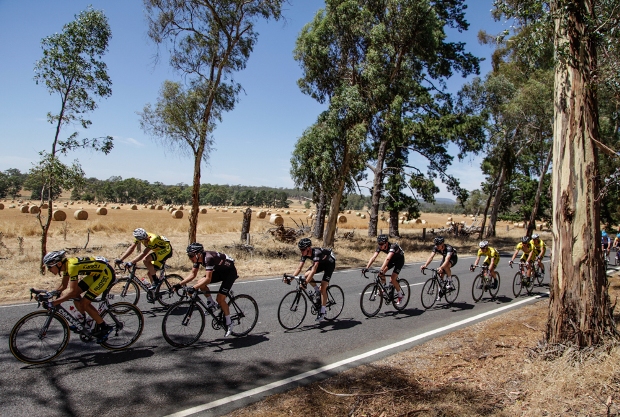 We welcome press releases and other news items that are of interest to our readers. Please send text or word files, and .jpg images for consideration to us at conte[email protected]