Rapha Condor JLT got off to an excellent start to the 2014 Tour Series, finishing the first week with a team time trial win at Stoke and an individual win for Graham Briggs in Barrow.

Despite missing out on a team win in one of the criterium rounds, the Men in Black’s performances in the first week were enough to put them into the overall lead in the series.

“We’ve shown that the form is there, but there are still areas we can work on. We’ll analyse our performances so far and see how we can take that forward into the next rounds.”

At the first round in Stoke Rapha Condor JLT won the opening team time trial, before following up with a strong third place in the first criterium of the twelve race series.

The team, comprising of Kristian House, Felix English, Ed Clancy, Tom Moses and Graham Briggs clocked a time of 3’02” for the two-lap race, beating NFTO by less than a second to claim a thrilling victory.

The Men in Black went into the evening criterium wearing the series leaders jerseys but found the going tough after their previous efforts, still managing a strong third place in the team competition on the night.

On Thursday it was Graham Briggs who took a fantastic individual win, while the team moved back into the overall lead in the series thanks to an excellent second place on the night.

Briggs won his fourth Tour Series round by out sprinting Kiwi Tom Scully in a thrilling two-up finish, after the two strongmen had broken clear of the bunch at half distance.

Another tactical battle then began behind with Madison Genesis getting the better of the Men in Black to win the team competition on the night. However, it was John Herety’s men who moved back into the series lead by a single point.

The series resumes next Tuesday in Peterborough, before heading across to Aberystwyth. 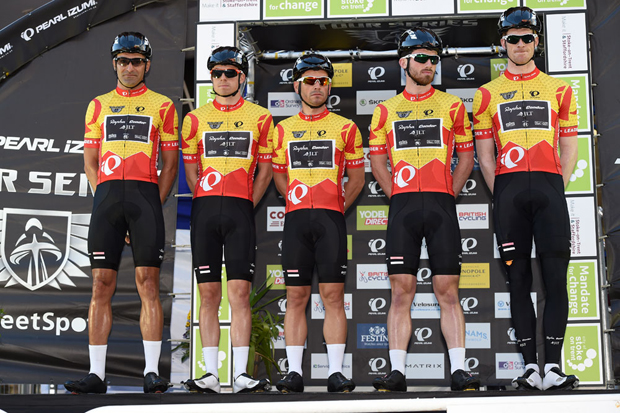