Rebranded Weekend of Bicycle Events in Anniston, Alabama Will Kick Off National Series for USA Cycling

Organizers have rebranded the popular two-day cycling and community event hosted in Anniston each spring as the Alabama Cycling Classic. This event, April 2-3, 2016, combines the Sunny King Criterium, now in its 14th year, and the Fort McClellan Road Race with the Noble Street Festival in downtown Anniston. The Alabama Cycling Classic will host the opening road races on the 2016 USA Cycling calendar of events for elite and professional cyclists across the United States.

“The momentum continues to grow in Anniston for this annual weekend of great food, great cycling and great family fun,” said Anniston Mayor Vaughn Stewart. “We take every opportunity to show off our historical downtown complete with its Victorian-age architecture, parks, and unique restaurants. From our micro-brewery to our mountain views, bike trails, and vibrant arts scene, Anniston has it all.” 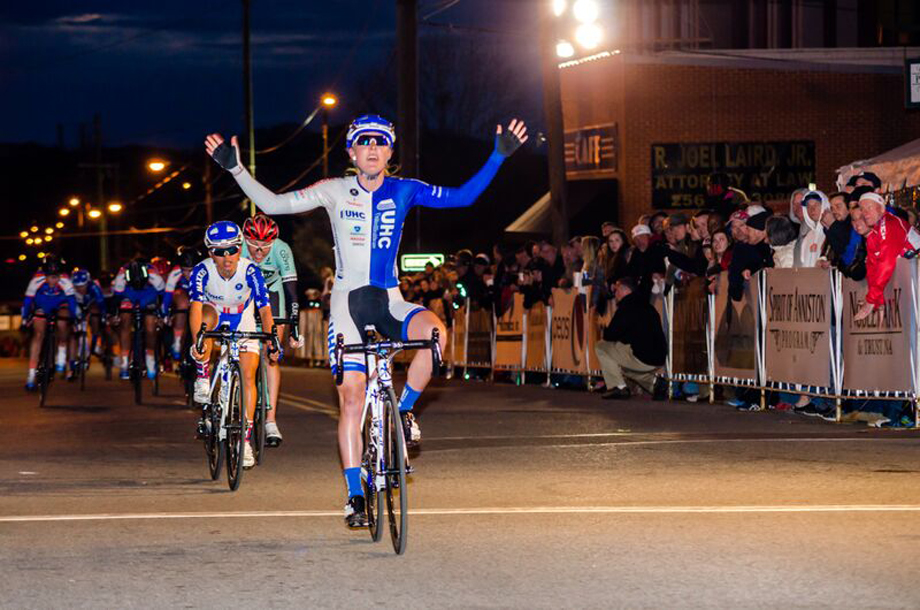 This is the third year that the Sunny King Criterium has served as the kick-off event for top-rated crite-rium races in the U.S. More than 500 cyclists competed in 20 categorized bicycle races last year – jun-iors, masters, elite/pro women, elite/pro men – on a one-kilometer, four-turn course in downtown An-niston. This year, more than $40,000 will be up for grabs among the races for USA Cycling- registered riders, as well as prizes and medals for amateurs.

Entering its sixth year, the Fort McClellan Road Race began in 2010 as the Foothills Classic Road Race. Along with a name change, a new course was introduced last year that included a 20-mile circuit with a mountain-top finish on Bains Gap. The 2016 edition will return with this same course, and has been upgraded as a national road race on the USA Cycling event calendar. The Fort McClellan Road Race will offer a $10,000 prize purse for the elite/pro women, elite/pro men. Equal prize purses will continue to be awarded for men and women in the professional categories. 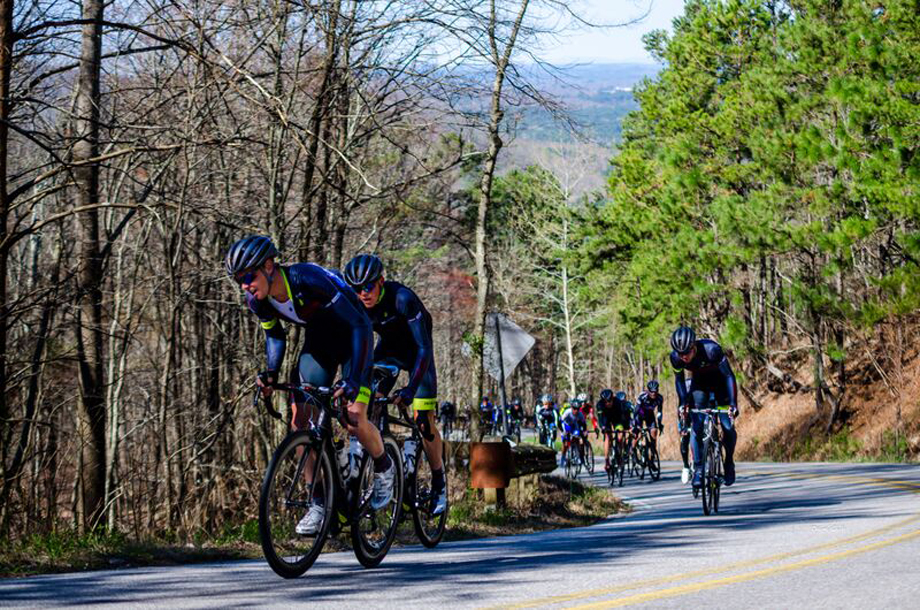 “The Alabama Cycling Classic events entertain thousands of cycling fans each year, and provide na-tional exposure for the top cyclists across the country, men and women. Having both the Sunny King Criterium and the Fort McClellan Road Race as kickoff events for USA Cycling competitions is tre-mendous. It speaks volumes about the dedication and high caliber of support and services provided by the City of Anniston, Calhoun County and generous support from Sunny King Automotive and all our sponsors,” added Marilyn Cullinane, who returns as race director for a third year. Her event man-agement company, Start Smart Cycling, operates both races for the Alabama Cycling Classic. The City of Anniston manages the Noble Street Festival.

In 2015, the featured professional races were dominated by the UnitedHealthcare Pro Cycling Team, recognized as having the best women’s team on the National Racing Calendar, and the Hincapie Rac-ing Team, finishing the year as the top-rated men’s team on the National Racing Calendar. British rider Hannah Barnes, of UHC, won the women’s Pro/Category 1/2 race of the Sunny King Criterium, fol-lowed by American teammate Coryn Rivera, who captured the title in 2013 and 2014. The top five spots for pro women in the Fort McClellan Road Race were secured by UnitedHealthcare Pro Cycling, with Alexis Ryan (USA) taking the title. 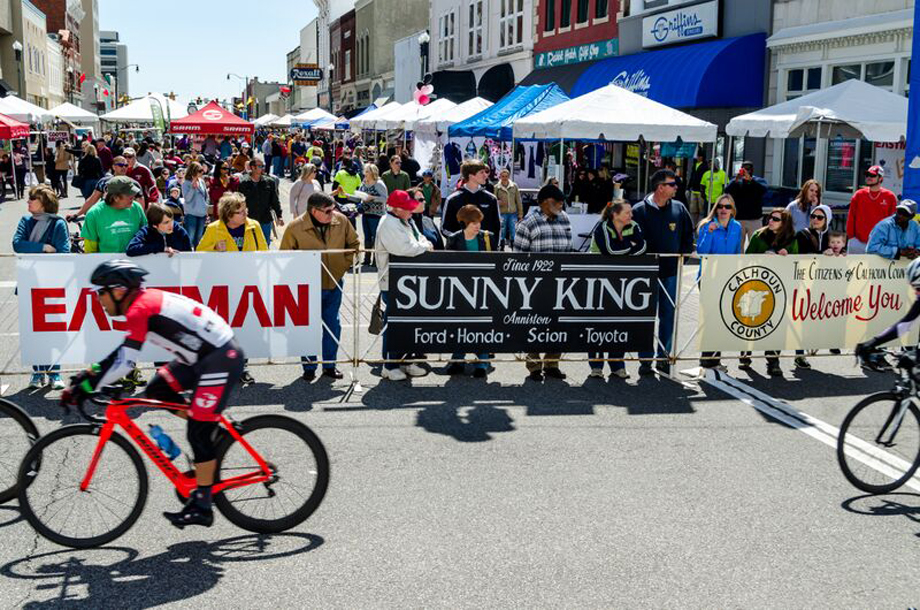 On the men’s side, American Ty Magner of the Hincapie Racing Team won the criterium, joined by two UHC riders on the podium, Luke Keough (USA) in second and Hilton Clarke (USA) in third. The top four spots for pro men in the Fort McClellan Road Race went to the Hincapie Racing, with Dion Smith (USA) winning the event.

A portion of proceeds from all bicycle race registration fees will be donated to the American Cancer Society Relay for Life chapter of Calhoun County. In the 10-plus years this beneficiary has been in-volved with the cycling weekend, more than $100,000 has been raised for cancer research and patient support. 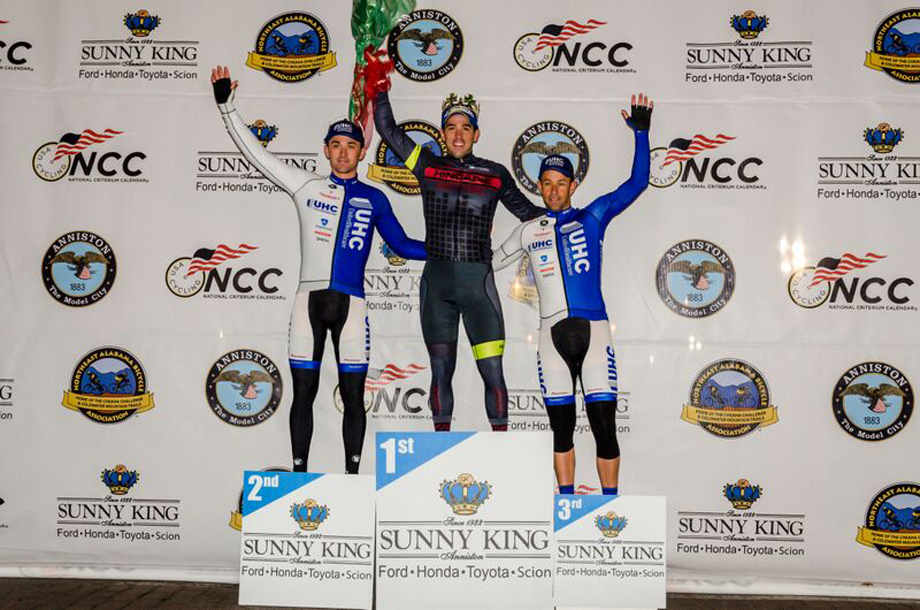 About Alabama Cycling Classic
The Sunny King Criterium began in 2002 as Anniston’s signature cycling event for professional and amateur male and female cyclists from around the globe. The start/finish line for the race is located at 11th and Noble streets in downtown Anniston, with 20 categorized races held from 11 a.m. to 9 p.m. The Sunny King Criterium is the first stop on the USA Cycling National Criterium Calendar. Three categorized road races for professional and elite men and women are held the following day for the Fort McClellan Road Race. This event features more than 7,000 feet of climbing, with the finish on Bains Gap. It is the first stop on the USA Cycling National Racing Calendar. All races are managed by Start Smart Cycling.

About Noble Street Festival
The annual Noble Street Festival comes alive with family-friendly activities to support the Sunny King Criterium. The festival is managed by Main Street Anniston. Activities in 2015 included “Taste on No-ble”, Scion KidZone, YMCA/Sunny King Scion Kidz Bike Races (children pre-K to grade 6), Mellow Mushroom Mad Dash and live music throughout the day. Food and beverage tickets for “Taste on No-ble” are made available for purchase that Saturday from designated Noble Bank & Trust tents throughout the festival.

About Sunny King
Located in Anniston, Alabama, King Motor Co. has been in business since 1922. Toyota joined the King Motor Co. in 1989, becoming Sunny King Toyota. A longtime supporter of the Sunny King Criterium and the Noble Street Festival, Sunny King Toyota is a 19-time President’s Award Winner, an honor bestowed upon less than 25% of Toyota dealers across the nation. Learn more: www.sunnyking.com.

About Start Smart Cycling
Start Smart Cycling, LLC (SSC) provides professional management and consultation for all areas of cycling and community-based events. SSC is able to assist in pre-production, onsite event manage-ment and post event follow-up. Follow on the web (startsmartcycling.com), on Facebook (StartSmart-Cycling), and on Twitter (Start_SmartBike).

Lee’s Lowdown: Change In The US & Giro To Japan!