Ride with the legend Miguel Indurain in the Dolomites

By Press Release On May 13, 2015
Share
Like PEZ? Why not subscribe to our weekly newsletter to receive updates and reminders on what's cool in road cycling?

Miguel Indurain. Miguelon. Big Mig. Eighty kilos and 1.88m of power and class, a rider blessed not only with intelligence but with the patience needed to make the most of it. A reticent champion, who could still carry a look of timidity while savaging the peloton. A symbol of the new democratic Spain, its youth and its potential, its eagerness to be a part of Europe and the wider world. The first – the only, now – man to win five consecutive Tours de France.

As a professional cyclist, Indurain was many things. And there were some things he was not. The Spaniard was never flashy, and what few critics he had confused that with a lack of panache. The thing is, you don’t need to be ostentatious when you’re the complete package. Miguelon could devour mountains and tear up time trials. On the flat, ascending, descending, in a group, on his own; it didn’t matter. He could – and usually did – win every which way. He was rarely flamboyant, but he was never fearful, either.

Greg LeMond’s back-to-back victories in 1989 and ’90 were big news in the English-speaking world, but in Spain all they only mattered in the context of Indurain. Had he not been riding for Pedro Delgado, the ’88 maillot jaune, could he have beaten the American? Had Spain’s beloved Perico – an anachronistic rider that lived to attack, to entertain and surprise and who often lost because of it – got in the way?

They’d get their answer the next year. Promoted to leader, Indurain showed the world just what he was capable of. Stage 13 from Jaca to Val-Louron included an ascent of the Tourmalet. LeMond had escaped at the bottom of the climb, but Indurain soon overcame gravity and his opponent’s enormous talent to real the American in and leave him behind with ferocious aplomb. After the summit, LeMond used his descending skills to close the gap, but when the road tilted skyward again on the Col d’Aspin, Indurain twisted the knife and increased his lead. Then, upon hearing that the dogged Italian Claudio Chiappucci was in pursuit, he waited. Two heads are better than one against the wind, after all. The pair rallied to the finish, where El Diablo took the stage and Miguelon donned the yellow jersey. It would be his for the next four years.

Writing at the time, the French newspaper L’Equipe documented the move with typical style.

“Everything turned around up there, amid the infernal noise of klaxons and helicopters, in that incomporable cacophony of the maddest moments of the Tour de France. Everything was sewn up there, on the last 500 metres of the Tourmalet, on this thread of narrow road, in the midst of the fists and the arms, those thousands of faces deformed by excitement. There were 500 metres and Greg Lemond was hunched savagely on his saddle. He got up. He sat down again. Got up again. He couldn’t pedal any harder. It wasn’t a pretty thing to watch, Lemond, in those moments…”

Watching LeMond, himself a great champion, suffer might not have been pretty, but seeing Indurain take control of the Tour de France was a captivating sight. It set the tone for half a decade. Like a force of nature, like a tidal wave in yellow, he swept up all before him. He won five Tours in a row, at one point wearing the leader’s jersey for an incredible 60 days running. He also won the Giro d’Italia twice – two rare Giro-Tour doubles that would, even had he won nothing else, make him a colossus in the sport. He beat Graeme Obree’s Hour Record. He was time-trial champion at the ’95 Worlds, and added a gold medal to his palmarès in the same discipline at the ’96 Olympics.

Indurain was a rider blessed with tack-sharp acumen and an abundance of race craft, full of time trialling prowess and climbing style, an almost inexhaustible talent, hidden behind a crooked smile and a shy demeanour, even under the brightest and hottest of spotlights. It will be a long time before we see his like again.

Miguel Indurain in the Dolomites: Legendary roads with a legendary rider

As part of our partnership with Pinarello and Hotel La Perla, inGamba is offering an exclusive opportunity to ride with Miguel Indurain this summer, surrounded by the splendour of the Dolomites.

You can find out more about this unforgettable experience here. 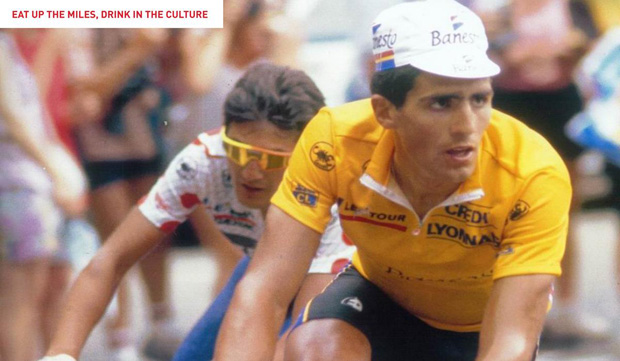 Youth and enthusiasm for the Asian race