Routes have been presented: Monte Berico at the heart of the Vicenza circuit. Grand kick off from Piazza San Marco in Venice.

The candidacy project for Vicenza and Veneto to host the 2020 road cycling World Championships continues to take shape and expand. 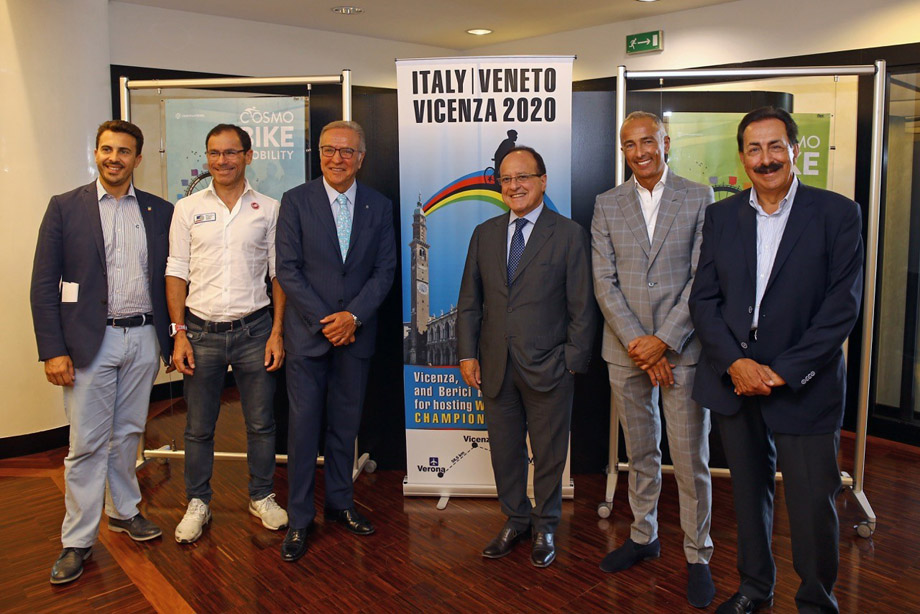 After the official announcement made by attorney Claudio Pasqualin, President of the Promoters Committee, to the microphones of the Rai Sport channel during the live broadcast of the Giro d’Italia stage with arrival in Asolo (Treviso), now they’ve chosen another great moment centred around cycling and the Veneto region to make their point for the bid to host the World Championships. The perfect background is offered by the opening of the CosmoBike Show in Verona (16-19 September), the largest cycling and two wheel trade fair in Italy in terms of interest and participation.

A round table meeting was held with Giovanni Mantovani, General Manager of Veronafiere doing the hosting honours, next to attorney Claudio Pasqualin (with the Vice President of the committee Moreno Nicoletti and council member Alessandro Belluscio), along with the Italian National Team Coach Davide Cassani. Also attending was Cristiano Corazzari, Council member to the Territory for Culture and Sport for the Veneto Region, as a representative for President Luca Zaia. In fact, the Region has been supporting and sponsoring this candidacy right from the beginning; through the World Championship event it aims to draw attention to the Veneto region as a territory with a strong affinity for cycling, where the bicycle is synonymous with great sporting events (professional and amateur), active tourism and environmentally sustainable mobility. 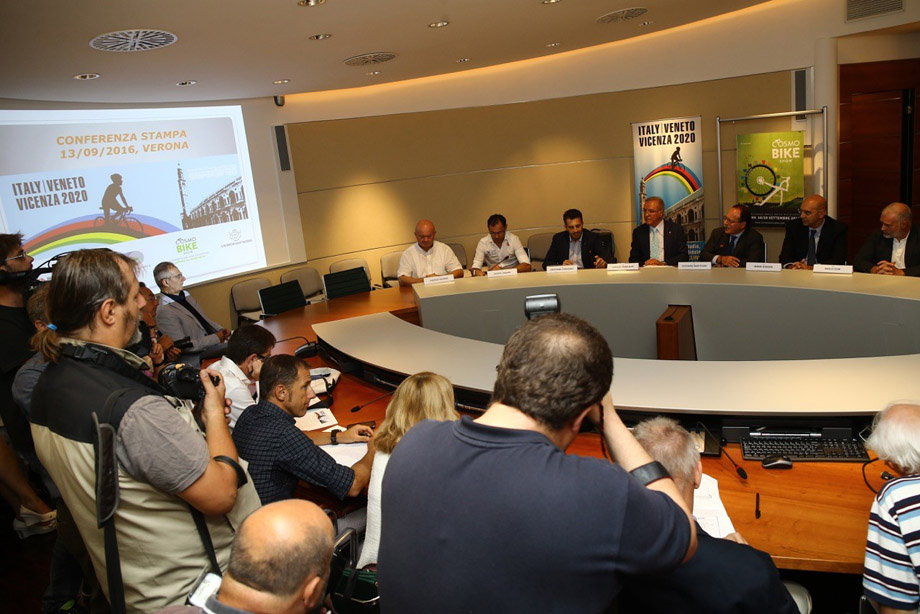 Today’s press conference, which featured the theme “Ciclismo Azzurro”, was built around two main pillars. On one side was the progress made by the Veneto candidacy to host the 2020 road cycling World Championships, presented by the President of the Promoters Committee Claudio Pasqualin. On the other were the projects laid out by the Italian national cycling team after the Rio Olympics, illustrated by the Technical Coordinator for all the teams, Davide Cassani, starting with the road cycling European Championships in Plumelec, France (14-18 September) and the Road Cycling World Championships in Doha, Qatar (9-16 October).

“This project started a while ago, on the wave of enthusiasm and experience matured with the Vicenza stage in the 2013 Giro d’Italia won by Visconti, and then repeated in 2015, with the arrival on Monte Berico, won by Gilbert. Back in 2013 we announced the Vicenza 2020 project in Florence during the road cycling World Championships in Tuscany. The project was warmly received by the then newly-elected President of the International Cycling Union, Britain’s Brian Cookson, as well as the FCI, led by President Renato Di Rocco, with which we immediately reached a deal on an organizational level. Then came the support of Giovanni Malagò, President of the Coni, and the major central and regional political institutions: first and foremost from Graziano Delrio, then under-secretary of the Government Presidency delegated to Sports, and from Luca Zaia, President of the Veneto Region. In this project the support from the Veneto Region has been essential,” explains the President of the Promotion Committee Claudio Pasqualin. 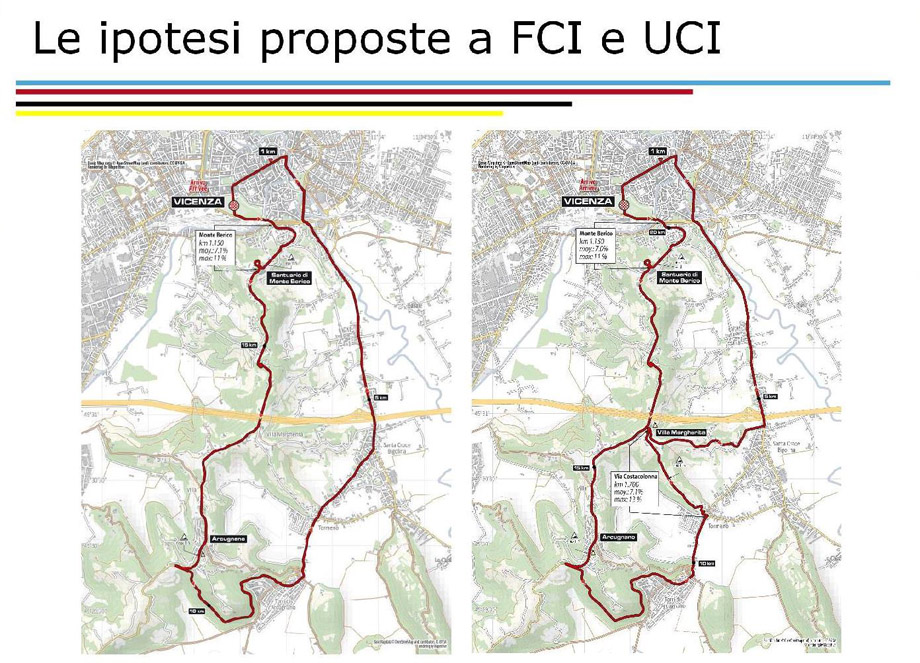 VENETO 2020, CITIES & ROUTES
Road: the Palladio circuit with the ascent on Monte Berico, grand kick off from Venice.
Time trial: Vicenza and Padua headliners.
There could not have been a better place than here today to put the World Championships back on the table, considering Verona’s cycling experience as host of the Rainbow Series twice in the recent past, in 1999 and in 2004. 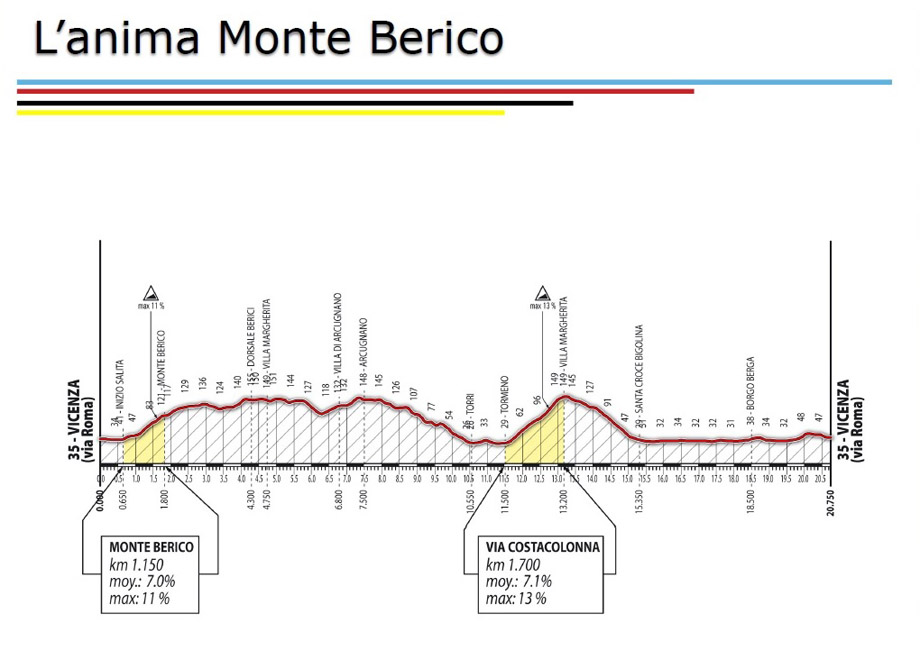 “What we are going to present today are the new initiatives regarding the cities which will be involved in the bid to host the World Championships in Veneto in 2020. And that is: all the actual 7 county seats. Vicenza will host the final circuit and some starting lines for the juniors. Padua and Venice will hold the starts of the time trials and the reigning test. Belluno, Rovigo, Treviso and Verona will stage the mass events with the Granfondo races. The World Championship races will take place or finish in the quintessential Palladian City of Vicenza in via Roma, after having taken on and overcome the circuit on Monte Berico. Out of the 7 time trials currently on the schedule, including individuals and teams, 2 will take place entirely in Vicenza and 5 will take off from Padua to come to a close in Vicenza as well. Of the 5 in line tests, 2 will kick off from Padua, 2 from Vicenza and 1 from Venice: this will be the main event, the professional race that was conceived from Piazza San Marco, with a walking pace transfer to the 0 km mark on the Ponte della Libertà bridge; from here the race will officially get underway towards the Riviera del Brenta, to land with 6 or 7 laps around the final circuit, depending on considerations of altimetry and kilometres. The circuit will cover 20.750 km and will be distinguished by 2 climbs: Monte Berico for 1.150 km with an average incline of 7% and maximum gradient of 11%; Via Costacolonna for 1.700 km with an average incline of 7,1% and maximum gradient of 13%” continues explaining attorney Claudio Pasqualin.

And it’s not all just about the Pros… 4 Granfondo events have been planned for the Saturday on the eve of the start of the World Championships, with starting line-ups from Belluno, Rovigo, Treviso and Verona. Four rivers of cycling tourists will all converge on Vicenza for a multi-coloured finale, just like the World Championship rainbow colours. Furthermore, the Thursday of the kermis, which traditionally does not feature medal competitions, will be the occasion for a company-relay: that is, a team time trial on the circuit at the heart of the World Championships to offer companies the chance to motivate their employees in special team building activities.

VENETO 2020, THE NEXT STAGES
Road to Bergen…
Right now Veneto is competing in the race to host the 2020 World Championships against the candidacy bid by Holland. In any case, the communications and PR road show by the Promotion Committee will continue with the aim of reinforcing the candidacy bid for Veneto 2020 Vicenza and garner further consensus among major representatives on the international cycling scene.

“We are optimistic and confident; the project is in an advanced phase, we’ve put together a high level dossier and it is right and necessary to be optimists. It won’t be easy, but now we’re seriously aiming towards the milestone in Bergen, Norway, where next year in September the 2020 World Championships will be assigned. As we already did in Richmond, USA last year, a delegation for the Promotion Committee for the 2020 World Championships in Veneto will fly to Qatar a month from now for the Doha World Championships: it will be the crucial moment to prepare the decisive next steps towards the nomination by the 2020 World Championship organization. We will have a special ambassador by our side, one who is revered in Qatar and around the world. I’m referring to Eddy Merckx, the strongest rider of all time. Furthermore, this week we will be attending the CosmoBike trade fair in Verona, distributing promotional informational material and taking other specific measures at the Regione Veneto stand,” concludes attorney Pasqualin. 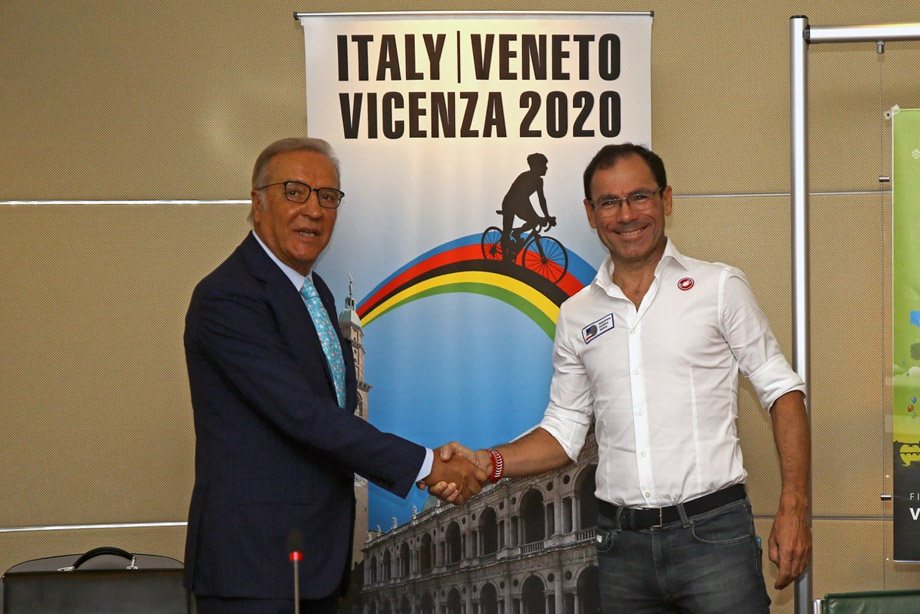 QUOTES
Davide Cassani – FCI, Technical Coordinator for Italian National Teams
“As a rider my first World Championship was in Italy, in Veneto; and my last was in Italy again, in Sicily. To wear the azure jersey on hometown roads, in your native country, cheered along by your local fans, is truly an indescribable emotion. And then the World Championship is an event that is good for everyone, for the entire movement. I know the members of this promotion committee very well and I believe they are the cycling soul of the city of Vicenza, considering the excellent job they did with the stages in the Giro in 2013 and 2015. I think this is the best team to aim for this rainbow milestone, and I hope that 7 years from the great 2013 edition in Tuscany and Florence, the World Championship can return to Italy playing a starring role. It can be a fantastic World Championship in every sense, bringing together cycling history with the scenic and cultural heritage of a great region. The World Championship becomes a photograph of the territory that hosts it that is distributed throughout the world. And then from a technical standpoint there are routes that can offer plenty of interesting inspirations. I would say that there is really everything you need to give a great gift to anyone who pedals in all of Italy.”

Cristiano Corazzari – Veneto Regional Territory Councilman for Culture and Sport
“The Region has always strongly expressed its affinity for great cycling, whether it’s institutional or simply a passion. We strongly believe in this project, and from the very beginning President Zaia has lent his full support to Vicenza and the Veneto in its bid as a candidate. Our Region has always been a land of cyclists and cycling; the territory has always shared strong ties with the bicycle. In a certain sense the bicycle represents the values of this land and its people; values such as sacrifice, work, dedication and commitment. This is why cycling and the World Championship can become ambassadors for the Veneto in all of Italy and throughout the world. This Word Championship will become an opportunity, a showcase for the region to highlight its inestimable scenic, cultural and artistic heritage, which is evident not only in its greater cities but also in every corner of the territory that can be discovered and enjoyed by bicycle.” 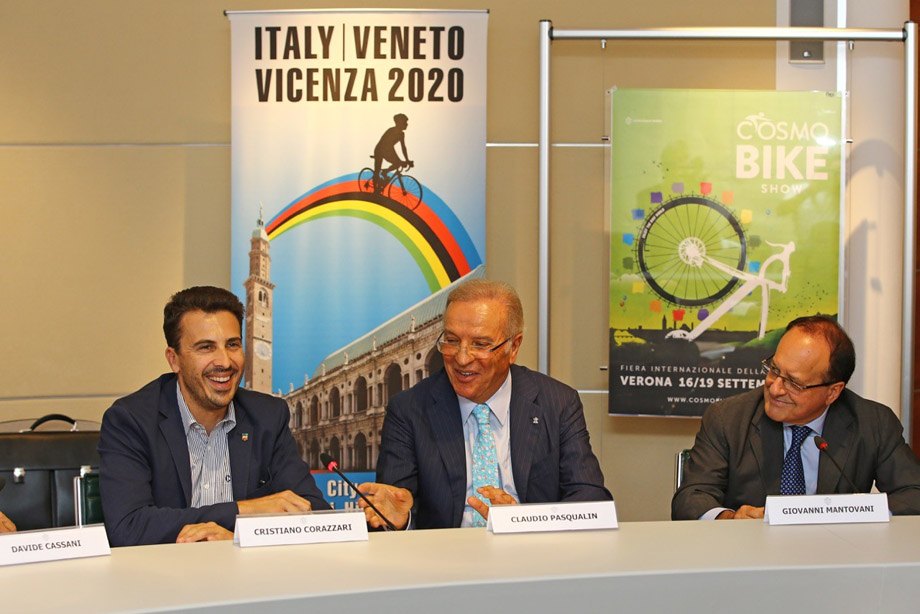