Roche on the World Championships: “A war of attrition”

Tinkoff-Saxo’s Nicolas Roche represented Ireland at the World Championships Road Race and crossed the finish line in 26th place as a part of the decimated peloton, seven seconds behind the winner Kwiatkowski. According to Nicolas, it’s not the best result of his career, but taking the grueling race into consideration he’s close to being satisfied.

“The World Championships is always a grueling war of attrition, with the pace slowly increasing with every lap until most riders have gone out the back door. I had absolutely nothing left in my legs as we approached the 500-meter mark and final sprint and I had to make do with 26th. It’s not the best ever result of my career but respectable enough in a very tough race”, says Nicolas Roche and admits that he could definitely feel the 255 kilometers after the race:

“I was so wrecked after my six and a half hours in the saddle that half an hour later I had to grab the handrail to pull myself up the steps of the team hotel before collapsing onto my bed”.

Roche was part of the group of favorites going into the final climb on the last lap but wasn’t able to respond to attacks. It was simply a matter of hanging on after 250 hilly kilometers in the rain.

“As Kwiatkowski attacked over the top of the last hill, with 5 k to go, there were only about 25 riders left in the peloton and I was pretty far back in the group. As seven more riders attacked off the front of the group, I grimaced and focused on hanging on at the back”, comments Nicolas Roche, who adds that the end of his season is getting close after 8 months, two Grand Tours and more than 13,000 kilometres of racing. 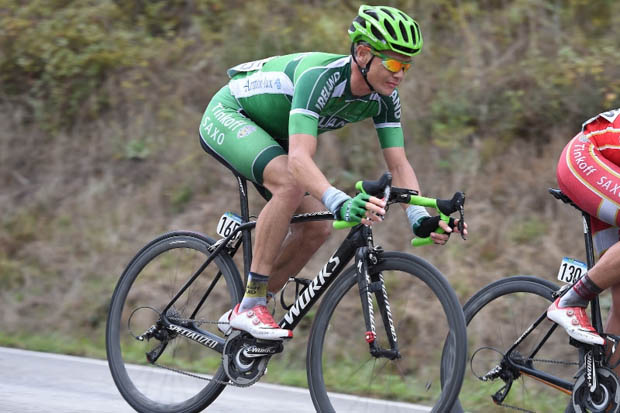