The UCI Women’s World Cup continues this weekend with the big one, Ronde van Vlaanderen. Most teams would have earmarked this race as a major goal on the calendar and will be well prepared to fight for victory on Sunday. Winning in Flanders means becoming part of cycling royalty.

Van Vleuten says, “For me it’s always special to race Flanders with all the crowds. I miss every year the goose bump moment I always had until 2011 when we did the Muur of Geraardsbergen with all the people that were watching. 2011 was the last time it was in, now there is final loop that is different but still a hard final with Oude Kwaremont, Paterberg, Kruisberg.”

While van Vleuten has won the race and finished fifth in the last two editions, Numainville will also offer valuable support having finished on the podium in 2012.

Van Vleuten offered more thoughts saying, “Oude Kwaremont is the place where last year the split happened. The last years is not my favourite pave part but this spring I feel stronger so I hope I will like it this year. Oude Kwaremont is a very hard long pave and uphill but there is a lot more in Flanders to worry about. So much can happen before then. You have to be in front all time, especially if it is raining.”

Having completed the race several times, the Dutch time trial champion says she knows the roads by heart but makes sure she has a refresher every year. “It is all about positioning. And that makes the race very nervous in the beginning and so hard for your mind also. It is very useful to know how you approach the hard parts. Not only the pave or climbs, for me I like the narrow roads, pave parts, climbs, they are all important. Where can you move to be in front at the right moment? It’s always very nervous.”

At 145 kilometres, the race is one of the longest on the calendar and together with the cobbles, short steep climbs and narrow roads, fans are in for an exciting day of racing. The race will start at 11am (CET). 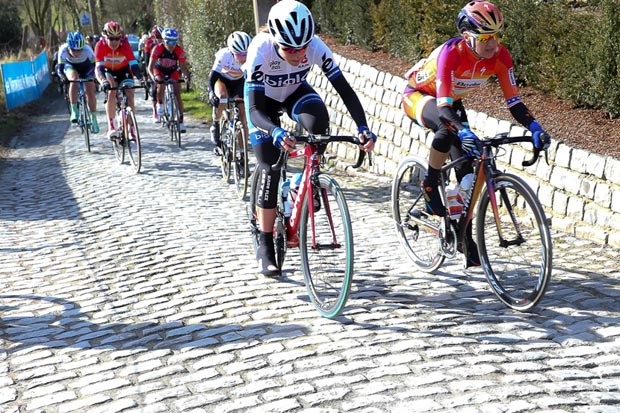